In chemistry, history of chemical equations refers to the historical development of the use of “symbols” and “characters” to represent chemicals and chemical reactions in diagrammatic or equation—technically: chemical equation—format. In short, in 1718 French chemist Etienne Geoffroy made the first affinity table, based on English physicist Isaac Newton's final and last "Query 31" (which contained verbal descriptions of affinity reaction preferences), and on this framework, in the 1750s, Scottish physician and chemist William Cullen, in his university lectures, began to employ 'darts' ( → ), i.e. affinity force, and 'crotchets' ( { ), i.e. chemical bonds, to represent the nature of change involved when various chemicals are brought into contact—all chemical equations to follow are modifications of this general scheme.

Beguin
In 1615, French iatrochemist Jean Beguin, in his Beginner’s Chemistry (Tyrocinium Chymicum), detailed the reaction of corrosive sublimate (HgCl2) with sulfide of antimony (Sb2S3), as shown below: [1]

This, according to English chemistry historian Alistair Duncan, is the earliest notion of a chemical reaction diagram.

English chemistry historian Maurice Crosland, likewise, in his noted 1959 article “The use of diagrams as chemical 'equations' in the lectures of William Cullen and Joseph Black”, states that Beguin's reaction diagram (above), can be considered as the “first chemical equation”. [2] English chemistry historian Henry Leicester, likewise, in his 1971 The Historical Background of Chemistry, defines this as “an almost modern equation.” [15]

Beguin's book was the second book on the required reading list for the chemistry lectures of Dutch physician and chemist Herman Boerhaave, the leader of influential "Leyden school" of physical science (see: schools of thermodynamics), which included students: Andrew Plummer, William Cullen, and Joseph Black. Plummer, of note, became a professor of chemistry at the University of Edinburgh, from 1726 to 1755, whose ideas on attractive and repulsive forces involved in chemical affinity had influence on his successors Scotts physician and chemist William Cullen and physicist and chemist Joseph Black.

Cullen
In 1757, Scottish physician and chemist William Cullen, building on the new science of affinity chemistry, recently launched by French chemist Etienne Geoffroy (1718) based on Isaac Newton's final and last "Query 31", pioneered the use of reaction arrow a 'dart' ( → ) to express or characterize the elective affinity preference (affinity force) of the reacting species and to use the crotchet ( { ) to signify species united, the prototype to the notion of the chemical bond (see: history of chemical bonding theory). The following shows three examples of Cullen's 1757 affinity reaction diagrams (center), with the modern chemical equation version shown adjacent (right). [3]

which Cullen, in his own words, summarizes as such:

“From the tables of elective attractions of Mr. Geoffroy, we may know whether or not a double elective attraction may be applied; by looking at the column of marine acid (hydrochloric acid [HCl], R1:C2) in his table we find whether the marine acid has any relation with regard to the silver (R5:C2). I find silver stands above quicksilver (mercury [Hg], R6:C2) and I draw a dart.”

the R#C# being the row number and column number of the position of the particular chemical in Geoffroy's affinity table (1718). Next Cullen states, referring to the right diagram (above), that:

“By looking at the column of nitrous acid, I find quicksilver (R5:C3) stands above silver (R6:C3); then I draw a dart from the acid to it.”

This is diagrammed above on the right. This reaction diagram is the first case of a double elective attraction used in Cullen’s lecture notes and possibly the first ever mention in science. [2]

Black
The next development of chemical equation theory came from Cullen's most-famous student Scottish physicist and chemist Joseph Black, who used modified diagrams, which appear in a manuscript of his early lectures, to explain what happens in double displacement reactions. In Black's reaction diagrams, he seems to replace Cullen's bonding bracket conception by what French chemist Pierre Macquer called the "molécule" (molecule) or "partie intégrante" (integral part) by a circle cut in two, where the two halves of the circle are the "atomes" (atoms) or "parties constitutives" (constituent parts), though Black does not use these specific terms. The following diagram, for example, according to Black, illustrates the reaction process where by "if a compound of volatile alkali with an acid is added to a mild fixed alkali, the fixed air will unite with the volatile alkali, while the fixed alkali joins itself to the acid": 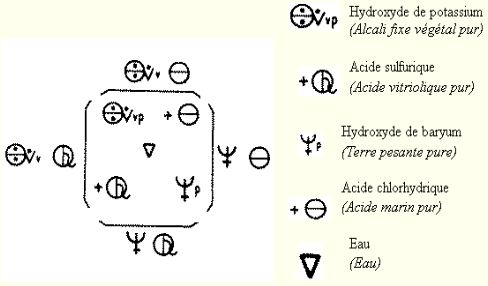 If this were re-written in modern "reactants" (left hand side) reacting (arrow) to form "products" (right hand side) style of chemical equation format, this reaction would be shown as follows:

or in modern chemical nomenclature notation: 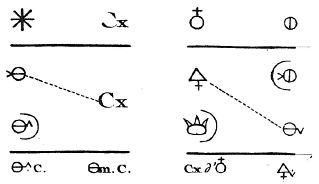 Demach, in conceptual mindset, was an adherent of Georg Stahl’s phlogiston theory and, supposedly, "remained wary of the new chemical nomenclature of Torbern Bergman"; meaning that he might have been wary about his chemical equation methods as well, although the above seems to be in the neighborhood of the Bergman chemical equation method. [13]

In 1794, German polymath Johann Goethe gleamed the insight of the science of human chemistry and initiated the subject of human chemical reaction theory, wherein his draft notes (which were destroyed), to the construction of his 1809 physical chemistry based novella Elective Affinities, as has been argued, conceptualizing the first human chemical reaction equations (see: EA|IAD: Reaction decipherment), using the 1785 German-translation of Bergman's textbook, to note; one example being Bergman reaction #20, shown below (left), which would have acted to serve the template for the reaction scenario, shown below (right), of P1:C3 wherein the Captain comes to Estate and displaces Charlotte from her marriage bond with Edward: 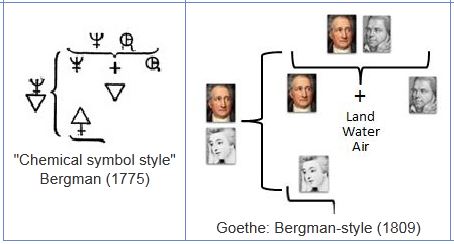 In 1782, French chemist Antoine Lavoisier was employing, it seems for the first time, a "horizontal" (modern) mathematical-stylized (+, -) representation of chemical reactions, using ratios and products: [8]

Moreover, Lavoisier, in 1787, according to British physical chemist Harold Hartley (1878-1972), was the first to make the first chemical equation with the sign of equality (=) who thus made balance the arbiter of the chemical balance sheet. [14]

In circa 1794, German chemist Jeremias Richter (1762-1807)—the person who coined the term stoichiometry as "art of chemical measurements, which has to deal with the laws according to which substances unite to form chemical compounds"—introduced or employed the following chemical equations: [7] 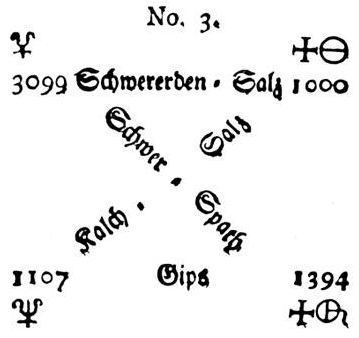 The following are chemical equations, in German, from the chemistry entry of the 1857 edition of Copier’s Universal Encyclopedia: [16]

The following is an 1858 chemical equation depiction of the reaction of acetate of lead with chromate of potass, from English chemist John Bidlake's Textbook of Elementary Chemistry, chapter three: "Chemical Affinity", which shows the Bergman-style reaction notation (above) and the semi-modern products-going-to-reactants (before and after) reaction notation (bottom), which uses the equals sign "=", hence the name "equation", a type of chemical reaction that Bidlake defines as a "double decomposition" (or double elective affinity as Goethe would have called it): [9]

In 1884, according to German physical chemist Walther Nernst, upgrade from the equal sign " = " symbol to the two-way reaction arrow "

), signifying a reversible reaction, came about in the 1884 Studies in Chemical Dynamics of Dutch physical chemist Jacobus van't Hoff, where in he made the reaction equation upgrade from affinity chemistry to chemical thermodynamics. In his chapter on chemical equilibrium, van't Hoff gives the following example of a homogeneous equilibrium in a liquid system:

according to which, conceptually, the two-way arrow "

" signifies the "equilibrium to be regarded as the result of two changes taking place with the same velocity in opposite directions, so that, in the case of homogeneous equilibrium, the study of the velocities of the opposing reactions permits us to calculate the ratio between the concentrations of the two systems when the state of equilibrium is attained." [11] This might well represent the start of modern chemical equation methodology.

In the preface to the 1978 Dover-edition of his book Historical Studies in the Language of Chemistry, English chemistry historian Maurice Crosland states that the “history of chemical equations” is a research topic still to be investigated, citing his 1959 article, and commenting that he is concurrently gathering information for a more robust history of chemical equations. [11]