In etymologies, Hmolpedia is a portmanteau of "hmol", referring to either one human molecule (a person defined as a molecule), a mol of human molecules (a metric system or mass of human molecules), and or the hmolsciences (human thermodynamics, human chemistry, and human physics) in general, and "encyclopedia" and was introduced in early 2011 as a new representative name for the content of the then two-thousand plus articles hosted at EoHT.info all centered around the subjects of chemistry, physics, and thermodynamics applied to the study of human existence. 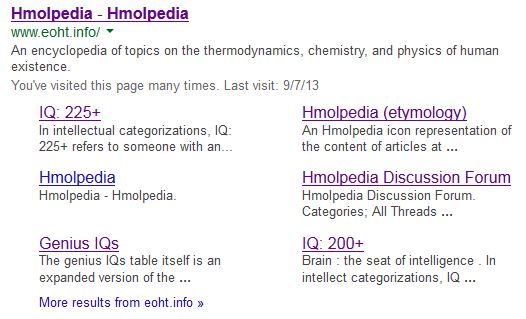 This commonality, in respect to site name "etymology", is no passing coincidence, being that Voltaire, cited by Catherine Cox as having had an IQ of 200, was one of the chief supporters of French philosopher Jean Sales, visiting him in prison and giving bail money towards his release, who by no coincidence is the 1789 coiner of the term "human molecule", the conjuctive portmanteau prefix of which "hmol-", meaning either "mol" of human chemicals (people) or "human molecules" (people) individually, is the root etymology of Hmol-pedia meaning collective childlike (-pedia) inquisitive study of the hmolsciences, framed in social matter of the hmolscience periodic table.

Hmolpedia is an upgrade to the previously used cumbersome acronym "EoHT wiki", a dexterously precarious acronym to reoccurring type out, referring to the content of articles hosted at the site EoHT.info.

The content of articles at EoHT.info, as of mid 2010, had become an online encyclopedia of the connected ‘hmol’, or "human molecular" subjects, of human physics, human chemistry, and human thermodynamics, albeit each with centralized core focus on thermodynamics, the branch of science, according to the Einstein postulate, least likely to every be overthrown, and whose first and second law, according to the Clausius postulate, govern the operation of the known universe.


In sum, the name Hmolpedia is short for "education of the young mind on the subject of thermodynamics, chemistry, and physics applied to humans". In this sense, the subject matter of this combined set of views (121+16+68+400) of these 600+ mindsets, would most aptly characterize, generally speaking, the subject matter of what one might call "human molecular physical science" or hmol science or human molecular science in shortened format. In this sense, the set of articles hosted at EoHT.info, at the 2011 level, can intuitively described as:

The former two, human chemistry and human thermodynamics, can best be described as “human molecular sciences”, being that the term "human molecule" is found in both subject matter definitions, the latter as a “human particle science”, generally viewing the human as a material particle (human particle) moved about by forces in trajectories. This title assignment is a 72-character (with spaces) name. The Wetpaint site settings, however, limit titles to 35-characters (with spaces). Hence, for the time being the following equivalence will be assumed:

Although this is not a perfect correlation, it would seem to suffice in the sphere of the functionablity character limitations and ease of use in daily contextual discussions.

Overview
The name "Hmolpedia" was introduced on April 2nd, 2011 to facilitate text discussion, i.e. an alternative to typing EoHT, EoHT wiki, or EoHT.info, and to embrace the more representative view that the EoHT.info collection of terms and topics connected to "human thermodynamics", which, at the 2000+ article level mark, has invariably grown to become representative of not only human thermodynamics, but the two other sister subjects of "human chemistry" and "human physics", which constitute the three divided subjects all centered on the ‘hmol’, the particle count unit for the quantities free energy G, enthalpy H, and entropy S of systems of "human molecules".

Etymology
In 1994, the first to outline the view that the subject of human thermodynamics should be a subject quantified in mass as “molar groups” or “molecular groups” was Canadian cyberspace philosopher Pierre Levy in his 1994 Collective Intelligence, not only uses the term "human thermodynamics" in context, but also states that. [1]

“Families, clans, and tribes are organic [carbon-based] groups. Nations, institutions, religions, larger corporations, as well as the revolutionary ‘masses’ are organized groups, molar groups [mol-groups], which undergo a process of transcendence or exteriority in forming and maintaining themselves. Finally, self-organized, or molecular, groups realize the ideal of direct democracy within very larger communities in the process of mutation and deterritorialization.”

The first to calculate a particle count number for his molar group unit was Hungarian sociologist Babics Laszlo and his so-called 2003 derivation of the “social Avogadro number.” [2]

The term "hmol" arose in circa 2006 discussions between American chemical engineer Libb Thims and Russian physical chemist Georgi Gladyshev, pictured adjacent, the first two editors of the "Human Thermodynamics wiki", as Hmolpedia was called at its 2007 launch (or Encyclopedia of Human Thermodynamics, 2008-2010), on the question of what "molar" or mol particle count number scheme would be most intuitive to base units of internal energy, Gibbs free energy, enthalpy, and entropy, etc., of systems of humans, when quantifying thermodynamic variable changes of systems of human molecules. In other words, the standard model of chemical thermodynamics uses energy measurements "per unit gram" of chemical entities or molecular entities. Energy calculations of interest for human social systems (systems of human molecules), however, cannot be based on reaction energy changes per gram, but rather per 70 kilograms (average human weight) at a minimum. The subject of the search for the so-called "human mole" is thus a puzzling subject, one touched in a query of Thims (who has been working in this field since 1995) to Glasyshev (who has been working in this field since 1977) during their 2006 meeting in Chicago.

The term "hmol" was formerly published as a proposed unit, in namesake and discussion, in Thims' 2007 textbook Human Chemistry. [1]

In online debates, the topic of the "h-mol" arose in the 2009 Moriarty-Thims debate, on whether or not a distribution of students in a field could be defined or quantified by a measure of entropy, when Irish physicist Philip Moriarty queried:

“A very simple question: What physical units would you use to describe the entropy of a distribution of students?! J per K? If so, justify why this is an appropriate choice of units! We spend a considerable amount of time in the first year of physics degree courses pointing out the importance of considering the correct units and dimensions for physical quantities.”

To clarify, the standard thermodynamic units for entropy, as found in free energy tables or thermodynamics tables, is:

“Concerning entropy units, the units are the same as any other chemical system, J per K per mol. The number of particles in one mole (6E23), however, is more than the current human population (7E9). Russian physical chemist Georgi Gladyshev, author of the 1997 book Thermodynamic Theory of Evolution, have been discussing this issue for some years now. The unit for a human mole (h-mol) will thus not be the number of particles in a 12-gram sample of carbon 12, but will be the number of humans in average sample of some typical population or volumetric sample. We have, as of yet, reached definitive conclusions on this unit issue.

One trend that you will find with small systems (1-1000 particle range), according to recent nanothermodynamics computer simulations, is that entropy becomes nonextensive (see, e.g. Mohazzabi and Mansoori’s 2005 article “Nonextensivity and Nonintensivity in Nanosystems: A Molecular Dynamics Simulation in Journal of Computational and Theoretical Nanoscience), which raises possible issues on the integrating factor of the inexact heat differential.”

In 2010, the terms "hmol science" and "human molecular science" arose as category names or dropmenu header names when it be began to become difficult certain terms, topics, and people solely in terms of one defining subject. American thinker Henry Adams, for instance, wrote and thought on all four connected "hmol subjects" of human molecules (was introduced to the term in 1873, said to be the subject of study of the historian, via Hippolyte Taine), human chemistry (attractions and repulsions, 1885), human thermodynamics (1909), and human physics (social gravitation, 1910); hence it is difficult to categorize Adams solely as either a human thermodynamicist, a human chemist, a human physicist, or a human molecular theorist?

In 2011, the term "Hmolpedia" was formerly proposed, by site creator Libb Thims, in the site discussion forum (see: thread), as a text-written alternative to the names EoHT wiki, EoHT, or EoHT.info, as these acronym terms are less intuitive to the general reader and moreover are cumbersome to type and use in daily discussions, repetitively.

Name imperfections
The few "not perfect" aspects of the prefix "Hmol-", which is meant to be representative of four different content subjects (human molecule, human chemistry, human thermodynamics, human physics), or in precise usage is shorthand for "one human mole", referring to a unit particle count of humans, is that firstly in human physics, an individual human particle view tends to be used, although this is not always the case, and secondly, and most importantly, although chemical thermodynamics is based entirely on molar units of Avogadro count sized systems, i.e. the number of atoms in about ten grams of substance, it is very likely that the units of "hmols" or a term similar to this will be used in the science of human chemical thermodynamics, i.e. in the sense of Gibbs free energy measurements for human transformations being in units of joules per hmol, there would seem to be one exception to this view, namely that owing to the visibility and millisecond-by-millisecond quantifiability of human-human interactions and interpersonal reactions, there will be many non-molar quantifications measurements, such as Gibbs energy of attraction and Gibbs energy of repulsion, that will accrue and be quantified, hence the name moral view will not always be used.