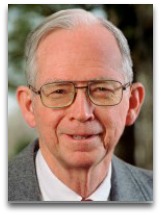 In hmolscience, Holmes Rolston (1932-) is an American religious philosopher-physicist noted, in religious thermodynamics, for his 1999 argument that god is the counter-current to entropy that lures life up the evolution ladder.

Overview
In 1999, Rolston, in his Genes, Genesis, and God: Values and Their Origins in Natural and Human History, argued to the effect that: [1]

“One can posit god as a countercurrent to entropy, a sort of biogravity that lures life upward.”

Rolston, supposedly, adheres to the main tenets of Darwinian evolution in his philosophy; albeit likely maintains some type of religious adherence. Rolston culls from Norbert Wiener in his thermodynamics explanations of life and evolution, in what he calls “cybernetic creativity”, or incremental gains in information that have been conserved and elaborated over evolutionary history; in the latter ideas he cites Jeremy Campbell. Rolson's thermodynamics views on life are as such:

“The knowhow, so to speak, to make salt is already in the sodium and chlorine, but the knowhow to make hemoglobin molecules and lemurs is not secretly coded in the carbon, hydrogen, and nitrogen. Life is a countercurrent to entropy, an energetic fight uphill in a world that typically moves thermodynamically downhill (despite some negentropic eddies, and despite some irreversible thermodynamics). Thermodynamics need be nowhere violated, because there is a steady ‘downhill’ flow of energy, as energy is irradiated into earth from the sun, and, eventually, reradiated into space.”

In this last quote, Rolston seems to be culling from a mixture of the life-entropy theories of English astronomer Arthur Eddington (1928) and Belgian-born English thermodynamicist Alfred Ubbelohde (1946).