In hmolscience, homework problems are any number of noted example problems and queries proposed in various articles and books, some of which are slowly being collected below and given out as assigned questions to students, such as in human thermodynamics education.

In 1975 to 1995, American materials scientist engineer John Patterson, at Iowa State University, famously gave handouts of various creationist claims about thermodynamics to his thermodynamics students to find the reason for the incorrectness of each statement as homework assignments.

The original listing of actual college textbook style and of chapter homework problems were penned by American physicist Alan Lightman in 1992, Swedish physical chemist Sture Nordholm in 1997, American astrophysicist Christopher Hirata in circa 2000.

In 2003, American mechanical engineers Michael Moran and Howard Shapiro, in their Fundamentals of Thermodynamics, and subsequent editions to follow (2007, 2010), began to include a few thermodynamics applied to humanities stylized homework problems. [11]

Some of these homework problems, and others, are listed below, in order of ranking predominance:

Nordholm’s problems | Human chemical thermodynamics
In 1997, Swedish physical chemist Sture Nordholm, in his Journal of Chemical Education article “In Defense of Thermodynamics: an Animate Analogy”, first outlined the subject of what he called animate thermodynamics, or thermodynamics applied to the humanities, and then concluded with eight example homework problems. These are listed below (first column), each listed with with Nordholm's appended "comments" (second column). The third column contains links to Hmolpedia pages that might be helpful or give clues to solving the given problem.

Lightman, in the same appendix, has other similar sorts of discussion problems / homework problems in areas of human physics, such as on how relativity and or how the Heisenberg uncertainty principle applies to the humanities, in areas such as philosophy.

Of note, in 1996, Lightman published a twenty-page solutions to addition problems manual. [6]

Hirata's exercises | Human chemical thermodynamics
In circa 2000, American prodigy turned astrophysicist Christopher Hirata, penned a number of "exercise examples" to each of the five parts of his "The Physics of Relationships" article (see: relationship physics); some of these are listed below: [8]


Moran
In 2003, Moran, in his Fundamentals of Thermodynamics (3rd ed), co-authored with American mechanical engineer Howard N. Shapiro (c.1947-), and editions to follow (2007, 2010), began to include thermodynamics applied to humanities stylized homework problems, mostly of the economics thermodynamics variety; the first of which is the following Nicholas Georgescu-Roegen 1971 "material entropy" framed query: [12] 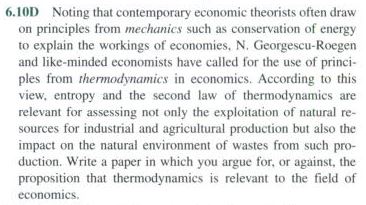 Here, in 6.6D, we see what seems to be discussion of pre-second law based thermodynamic economic equilibrium theories, and, in 6.10D, life and second law paradox discussions, as found in the works of Erwin Schrodinger (1944), Ilya Prigogine (1971-2003), and Eric Schneider (2005). The following is one from the 2010 edition, co-authored with Daisie D. Boettner and Margaret B. Bailey: [14] 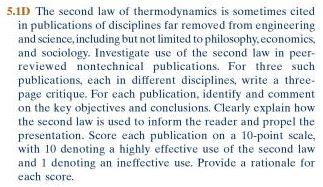 Tyndall-Maxwell questions
In 1874 a debate erupted at a Belfast, Ireland, meeting of the British Association for the Advancement of Science (BAAS) on whether or not modern science will replace religion or whether the two will forever remain separate, which involved a number of the greatest scientists of the 20th century such as James Maxwell, and a number of the founders of thermodynamics, such as Peter Tait and William Thomson. The debate erupted when the newly appointed BAAS president John Tyndall announced boldly that “all religious theories, schemes and systems must submit to the control of science, and relinquish all thought of controlling it.” In the four years to follow resulted in a number of articles published in Nature, one book, exchanges of post cards, and one last dying poem by Maxwell all centered around the nature of thermodynamics, death, morality, and the theories of immortality. A few of these openly discussed queries, as published mostly in Nature, are listed below.


Adams' problems
In 1873, American historian learned of Hippolyte Taine’s job description of the historian as one who follows and studies the transformations of individual human molecules or groups of human molecules and in doing so writes out their psychology, after which, in the four decades to follow, Adams embarked in a path of self-education and the means to apply physics, chemistry, and thermodynamics to explain humanity. Some of the questions he grappled with along the way are listed below.


Moriarty's problems
In 2009, Irish thermal-nano physicist Philip Morality made a YouTube video, for the Sixty Symbols video series of Nottingham University, explaining entropy in terms of the Boltzmann-Planck logarithmic interpretation of entropy, S = k ln Ω, and attempted to explain the microstates interpretation or multiplicity in terms of the students in a field. When questioned about potential errors in his video, by American chemical engineer Libb Thims, Moriarty mulled over his students as molecules analogy and made a recant video stating that his first description was only an analogy, and that in reality arrangements of students cannot be assigned with a thermodynamic entropy. This resulted as a prolonged 61-page, 15+ person, involving a number of noted thermodynamicists, such as Pierre Perrot (author of the 1998 dictionary A to Z of Thermodynamics), Ingo Muller (author of the 2007 A History of Thermodynamics), among others, debate over whether or not arrangements of people have a thermodynamic entropy or not.

The following are newly added problems:

● “If god does not exist, is it thus true that ‘everything is permissible’, as Fyodor Dostoyevsky famously wrote in his 1880 The Brothers Karamazov? (Ѻ)

This, comparatively speaking, is a fairly decent hmolscience-type homework problem, though not one easily solved, at first.