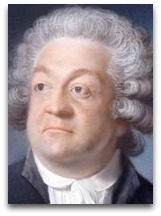 Other
In 1770, when the anonymous The System of Nature appeared, written secretly by Baron d’Holbach, it was initially attributed to Helvetius or Mirabeau. [1]

Quotes | On
The following are quotes on Mirabeau:

Quotes | By
The following are representative quotes by Mirabeau:

“Such, my friend, is my profession of faith. He who calls me an atheist or a materialist, is a pagan; and if I stand alone, I will remain a Christian to the last.”