In chemistry, hooked atoms theory was a view that certain types of atoms had hooks and others eyes, like the hook-n-eye fasteners of olden-days clothing, that when connected formed the tight bonds of attachments of hardened sorts of materials.

The view seems to have originated in the atomic theories of Greek atomic school, particularly in the 75 BC theories of Lucretius, who represented the views of his teachers Epicurus, Democritus, and Leucippus. [1] It is also said that Rene Descartes significantly used the hooked atom theory during the revival period of atomic theory.

Democritus
Democritus believed that atoms existed in the following varieties : 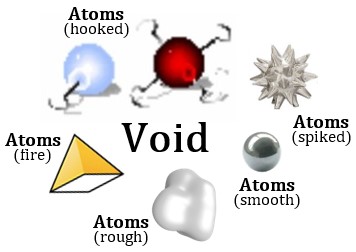 Things that were of solid shape were hooked and so stuck to one another; something akin to the following

In order to make the solid hard, however, the atoms must not only be hooked, but retain their hooked shape when they come into contact with other atoms. [3]
Lucretius
In 55BC, Lucretius, in his On the Nature of Things, described the shapes of atoms as follows:

“Since atoms are what they are by nature, and not cut by hand to a single predetermined pattern, some of them must have shapes unlike some others. By reasoning, we may readily comprehend why lightning-fire is much more penetrating than ours that comes from torches here on earth. Or one may say that the lightning fire is finer and made in smaller shapes, and thus can pass though opening that our fire cannot, spring as it is of wood and torch.”

“Things which are hard and dense must be composed of particles hooked and barbed and branch-like, intertwined and tightly gripped.”

“Everything that we see dispersed quickly, like smoke and clouds and flames, must be, if not all made of particles round and smooth, at least not of the tangled and intertwined; thus, they may puncture flesh and pass though stone yet do not cling together … they are of pointed, but not tangled atoms. Now things you see are bitter but also fluid, like sea water: think them not strange at all. Whereas they flow, they’re made of round and smooth atoms, but numbers of rough ones interspersed cause pain. These can’t be hooked or interlocked: though they are rough, you see, they must be round; thus they may roll but also cause pain.”

“Atoms exist in a finite number of different shapes.”

“Light can pass though horn, but rain is halted. Why, if not that atoms of light are smaller than those of water, liquor of life. And wine, we see, will flow on the instant through a sieve, but oil is hesitant and slow, either because its particles are larger, or else more hooked and tightly intertwined; and this is why they can’t be pulled apart so quickly into separate single atoms that seep though single openings, one by one.”

“To begin with, then, all the particles of earth, since they were heavy and tangled, moved to join at center, and all sank down to the lowest zone. The more they moved to join in one great tangle, the more they squeezed out those particles that made the sea, stars, sun, and moon, and the walls of this great world. For these are made of atoms smoother far and elements rounder and smaller than are those of earth.”

“Clouds grow when many atoms, flying high in the reaches of heaven, all at once form union—rougher atoms, which, though by smallest barbs entangle, still may catch and hold each other.”

According to Lucretius, some atoms have hooks by which they are fastened together, and come closer to each other. Hard things, like diamond, basalt, iron, are formed of such atoms:

“Things which look to us hard and close-textured must consist of atoms that are hooked together, and must be held in union, because welded together through and through out of atoms that are, as it were, many-branched. Amid this class in the foremost line stand diamond-stones, accustomed to despise blows, and stout basalt blocks, and the strength of hard iron, and the brass bolts which scream out as they hold fast in the doors.”

Liquids are, as rule, formed of smooth and round elements, but sluggish fluid, like oil, may have its atoms: “larger or more hooked and intertangled” than those of wine. [1]

Gassendi
French thinker Pierre Gassendi is often said to have been the biggest impetus behind the revival of atomic theory, as outlined in his 1649 book, wherein he gave the view that the properties of atoms (e.g. their taste) depend on their shape (pointed or round, elongated or squat, etc.), and he had the idea that they might join together, to form what he called ‘molecules’, by a kind of hook-and-eye mechanism. [5]

Newton
In 1718, Isaac Newton famously outlined his atomic bonding theory, in "Query 31" of his Opticks, whereby atoms attach to each other by some "force". Specifically, after acknowledging the various popular theories in vogue at the time, of how atoms were reasoned to attach to each other, i.e. "hooked atoms", "glued together by rest", or "stuck together by conspiring motions", Newton states that he would rather infer from their cohesion, that "particles attract one another by some force, which in immediate contact is exceedingly strong, at small distances performs the chemical operations, and reaches not far from the particles with any sensible effect." Newton was also the first, supposedly, to criticize the hooked atom theory of bonding: [6]

“The parts of all homogeneous hard bodies which fully touch one another stick together very strongly, and form explaining how this may be, some have invented hooked atoms, which is begging the question [why?].”

Most of his effort on the subject of chemical bonding, however, remained verbal to the affect that he attributed bonding to chemical affinity.

Lewis
The hooked atom bonding theory was still being taught to chemistry students in the early twentieth century. In circa 1902, American physical chemist Gilbert Lewis began to use an electron dot structure to represent bonding between atoms in lecture to his chemistry students at Harvard. By the time of this 1923 book Valence and the Structure of Atoms and Molecules, had reached the conclusion that science, after nearly 2,400-years of theoretical struggle, has finally arrived at a concrete model of the chemical bond over that of the hook-and-eye bonding model:

“Two atoms may conform to the rule of eight, or the octet rule, not only by the transfer of electrons from one atom to another, but also by sharing one or more pairs of electrons. Two electrons thus coupled together, when lying between two atomic centers, and held jointly in the shells of the two atoms, I have considered to be the chemical bond. We thus have a concrete picture of that physical entity, that ‘hook and eye’ which is part of the creed of the organic chemist.”

Pauling
In 1917, to cite one last example, American undergraduate chemical engineer named Linus Pauling was learning the Dalton hook-and-eye bonding method at the Oregon Agricultural College, which was the vogue description of bonds between atoms at the time. Each atom had a certain number of hooks that allowed it to attach to other atoms, and a certain number of eyes that allowed other atoms to attach to it. A chemical bond resulted when a hook and eye connected. Pauling, however, wasn't satisfied with this archaic method and looked to the newly-emerging field of quantum physics for a new method. [4]

“The conception of hooked and spiked atoms, no doubt originally derived from Lucretius, continued through the seventeenth into the eighteenth century.”