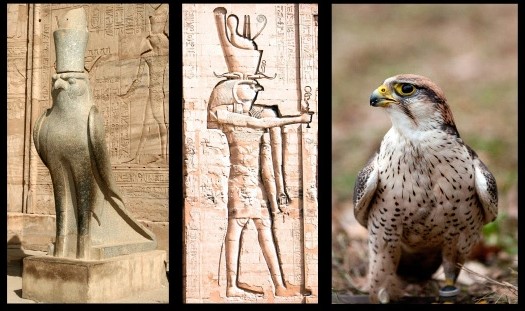 The following, from the Ani-version of the Egyptian Book of the Dead, shows Horus labeled with the hieroglyph "Horus the eyeless": 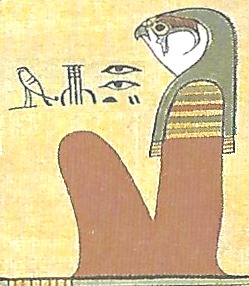 “According to Herodotus, the Egyptian Jesus, known as Iu-em-hetep [child Horus] was one of the eight great gods who were described in the papyri as having existed almost twenty-thousand years ago.”

Harpur, to note, footnotes the name Iu-em-hetep, incorrectly, as: “who the Egyptologists call Imhotep”, which is a real person.

Heliopolis
Horus, according to the Heliopolis recension (see: Heliopolis creation myth), was morphed or merged so as to become the son of Osiris and Isis.

Etymology
Horus originated, supposedly, as a totem of an Upper Egyptian nome which at the opening of the dynastic epoch is believed, according to some historians, to have conquered Lower Egypt and brought about a union of Egypt.

In circa 2,800BC, the priests of Heliopolis, according to Jon White (1963), merged the worship of the so-called historical Horus with the legendary Horus, son of Osiris.

Osiris-Horus | Jesus
In c.100 to 500AD, during the Roman recension, the joint god Osiris-Horus became rescripted, monotheistically, into the man god Jesus.

In 1877, English Egyptologist William Cooper, in his The Horus Myth in its Relation to Christianity, attempted to stitch out the roots of Jesus Christ and Christianity in terms of the Horus. [2]

“The Egyptians, in fact, have a tradition that Hermes [Thoth] had thin arms and big elbows, that Typhon [Set] was red in complexion, Horus white, and Osiris dark.”

“Even after political unification, in c.3100BC, there were always two Egypts: Lower Egypt (delta religion of Nile), represented by Seth, and Upper Egypt (from Memphis at the apex of the delta and along the river to its upper reaches at Aswan), represented by Horus.”

Further reading
● Griffiths, John G. (1960). The Conflict of Horus and Seth: from Egyptian and classical sources: a study in ancient mythology. Liverpool University.