In science, hot, as contrasted with “cold” (i.e. cold body), refers to a description a body (i.e. hot body), or system, whose internal parts have a higher state of “motion” (Bacon, 1620), gauged, via zeroth law, by a third body, the thermometer, which discerns the relative state of motion, or temperature; which decreases to a minimum at absolute zero, according to the third law. [1]

Hot or Not
In 2000, American electrical engineers James Hong and Jim Young launched the visually attractiveness rating site HotOrNot.com, aka “Hot or Not”, the 2015 logo of which is as follows:

according to which photos of people are "rated" on a supposedly (depending up opinion) "metaphorical" hot-to-cold scale of 10 (hot) to 1 (cold), thereby giving a common consensus gauge of the relative "hotness" or "coldness" of the visual nature of a person; the site was conceived as a technical solution to a disagreement they made one day over a passing woman’s attractiveness. [2]

In circa 2003, Libb Thims, amid the drafting of his Human Thermodynamics manuscript, was using the site to conduct scientific studies.

In 2005, imaging researcher Pierre Tourigny, supposedly aware of the beauty rule of the thumb that “averageness” equates to attractiveness, selected 30 random photos from Hot or Not, spanning the attractiveness range, and morphed the photos, three per each 0.5 hotness range, as well as the thirty photos as a group; the following being the results: (Ѻ)

The following shows the composite "average" photo, a morph of all 30 photos, as compared to the morph of the three vote-deemed hottest morph: 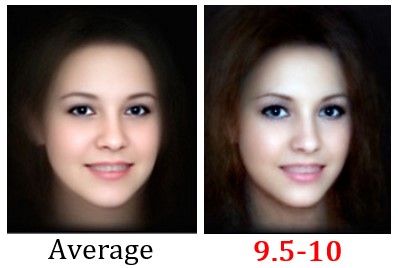 “A woman is like a tea bag—you can't tell how strong she is until you put her in hot water.”

“I think human thermodynamics is pseudoscience. The interchanging of words with precise scientific meanings, i.e. bond, energy, reaction, hot, etc., with their everyday meanings is one of the cornerstones of pseudoscience. Of course human beings obey the laws of thermodynamics like everything else in the universe, but trying to apply equations which only describe larger systems of microscopic particles to analogous situations between human beings, just because the everyday and scientific words involved happen to correspond, [is erroneous].”