In religio-mythology, How the Bible was written? refers to the method in which the Bible of the Egyptians, specifically the Creation Version A (see: Genesis), of the Nesi-Amsu Papyrus (310BC), and the Egyptian Book of the Dead (c.1900BC), generally, were translated and rescripted (see: god character rescripts), monothestically, into the Hebrew Bible (Pentateuch), i.e. the Old Testament, and the Christian Bible, i.e. the New Testament. [N1]

Overview
The following gives an overview of how Jewish scholars, called Cohens, who were “high ranking Egyptian priests” (Herodotus, c.450BC), took the two main Egyptian mythology creation myths, "Creation Version A" and "Creation Version B", and translated them, monotheistically, using the god-to-prophet god reduction method, into a new one god based "creation" in a guise of Jewish mythology, as found in the Old Testament of the modern Christian Bible, in the form of Christian mythology; the following are the main rescripts of Creation Version A [1]

Alternatively, the appearance of “light” following a period of “darkness” can be interpreted from the following section of Version A: 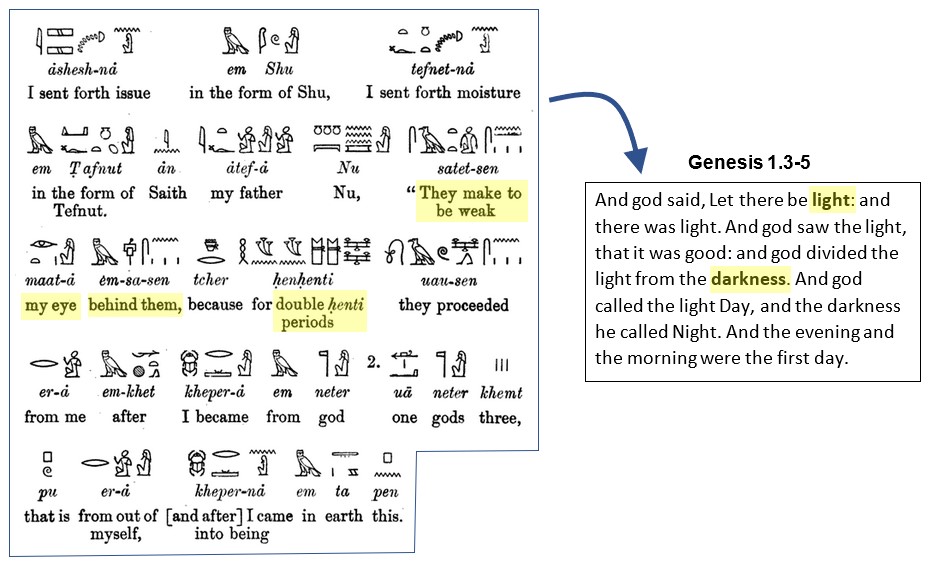 Namely, as explained by Budge (1904), after Shu (air) and Tefnut (moisture) were created, they, together, acted as a fog to cover the “eye” of Ra (or Nu), which is code for the “sun”, as found in the sentence “they made my eye weak”, because the sun (eye) had been behind them for a period of “double henti” (hen = 60 years) or 120 years.To continue:

Here, to clarify, the motif of Moses (see: Osiris, Dionysus-Bacchus, and Moses) being “found in an ark” on the Nile (see: baby in basket on river), following his birth, and then raised by the pharaoh’s daughter, but wet-nursed by someone else, refers firstly to how Osiris was put into chest and then thrown into the Nile (see: death and resurrection of Osiris) and later reborn in the form of an evergreen tree (see: Christmas tree) that grew up around the ark; and secondly, the myth of how Horus was born to Osiris and Isis, but nursed by Nephthys, the sister of the Isis, the “pharaoh’s wife”, so to say, in the sense of the extant pharaoh desiring to become an “Osiris Pharaoh” in the afterlife.

New Testament
The following shows how, building on the previous, the last paragraph of Creation Version A was reformulated into the guise of a Jesus-based New Testament, wherein the joint characteristics of Osiris AND Horus (see: Osiris-Horus) become rescripted into a new Jesus Christ character, wherein Seb (or Geb) became Joseph, Osiris became both the "Holy Spirit", "god the father", and Lazarus, Isis became Mary or the "Virgin Mary", and Horus became Jesus or "god the son":

In both versions, New and Old Testament, to add more detail, the god Nu (or Nun) become Noah, and the god Ra became the prophet Abraham.
Other
Of note, Gary Greenberg, in his 101 Myths of the Bible (2000), gives a nearly equivalent, point by point, Egyptian to Hebrew transliteration, as above, but goes into more detail as to which creation myth, of the following recensions, went into each word and sentence of the opening paragraphs of Genesis: [2]

as the main thrust or content them of Creation Version A is that of the Heliopolis creation myth, but aspects of, e.g., the Ogdoad of Hermopolis creation myth are found in Genesis 1.2-8 if one deconstructs things further.
Quotes
The following are related quotes:

“Returning to our [Creation Version B] narrative we find that the god continues, ‘I came into being from primeval matter, and I appeared under the form of multitudes of things from the beginning. Nothing existed at that time, and it was I who made whatsoever was made. I was alone, and there was no other being who worked with me in that place. I made all the forms under which I appeared by means (or, out of) the god-soul

which I raised up Nu

, out of a state of inertness (or, out of the inert mass).’ In this passage we have a new element introduced, that is, a ‘god-soul’, or, in other words, the soul which possessed the quality of neter, and was existent in a quiescent state in the inactive watery mass of Nu. When we consider the general ideas of the Egyptians about the soul this statement need not surprise us, for we know that they endowed every object in nature with a soul, and if they assumed the existence of a mass of primeval matter they were bound, logically, to give it a soul. Thus, we have in the second version of the story of the creation an idea which is wholly wanting in the first.”