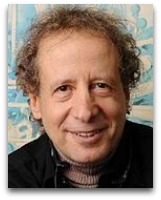 In hmolscience, Howard K. Bloom (1943-) is an American record producer turned science writer noted for his 1997 The Lucifer Principle and his 2012 The God Problem, wherein he attempts to grapple with problems of good and evil in the context of atheism and godlessness, citing the work of thinkers such as Jeffrey Wicken, Paul Davies, Aristotle, Heraclitus, Frank Lambert, John Campbell (“Evolution as Nonequilibrium Thermodynamics: Halfway There?”, 1988), David Depew, Bruce Weber, Daniel Brooks, David Layzer, among others. [1]

Religion
Bloom was born into a Jewish family (see: Jewish atheism). In 2012 interview, he defined himself as a non-militant “stone-cold atheist”, who believes in “tolerant atheism” and “pluralistic atheism”, but is not in favor of the new atheism variety. [3] In 2013, in his “Sex and the Second Law of Thermodynamics” talk, Bloom makes a number of "Freudian god slips", amid jokes and discussion, e.g. "thank god", "oh god, what's his name?", or "god knows how many years" (52-min); yet he also defines himself in the talk as a "devoted atheist"; he seems to say "god knows" (or lord knows) several times, in a way that belies a hidden theism, which compounds his efforts to parrot free will in particle physics (below).

Free will | Particles
In 2012, Bloom, in his The God Problem, supposedly talks about particles having free will. [3]

Sex | Thermodynamics
In 2013, Howard Bloom gave at talk entitled “Sex and the Second Law of Thermodynamics: How Sex Breaks the Law of Physics”, the abstract of which is as follows: [2]

“At the turn of the 19th century, Sigmund Freud proposed something absurd, his concept of libido, the idea that humankind was driven by sex. Was Freud crazy? Or was he right? Why? And how does our sexual obsession relate to the evolution of the cosmos? How does it relate to two rules that imply that sex should not and cannot exist: the principle of least effort and the second law of thermodynamics? Is sexual selection a least-effort proposition? Is it the most energy-efficient way to a goal? And what goal could that possibly be? Is plant sex, with its extravagant use of the advertising devices we call flowers, maximizing the universe's entropy? Is the peacock's tail a sign of a thrifty cosmos? How about your sexual and romantic obsessions as you read this sentence and secretly covet the body of a person ten feet away from you? Do these things hint that the cosmos is very different than the thermodynamics obsessive beliefs? And what does that mean for the way we look at strange things like psychology?”

Bloom goes on in his talk, which he refers to as "Sex Defies the Law of Physics" (19:00), to discuss the least action principle of Pierre Maupertuis and then entropy and second law of thermodynamics, which he truncates as "all things fall apart", of Rudolf Clausius, which he argues that reproduction, sex, and love are at odds with, verbally speaking, in colloquial sense. He then begins (26-min) to refute Richard Dawkins' selfish genes hypothesis via anecdotes and stories of his friends, along with mitosis and meiosis, and what seems to be armchair versions of evolutionary psychology. At 27:30, he says that you can't even get humans out of the second law of thermodynamics. He defined people as a "pile of protons" (42-min). At 1:06, he begins to see teleology. At 1:15, he gets into "emergent properties". Bloom comes off, in this talk, in a sense, as a kind of semi-intelligent atheism-siding version of Kent Hovind, in many of his arguments.

Education
Bloom states that he got into science at age 10 studying subjects including microbiology and theoretical physics; then collaborated in the creation of a computer that won a Westinghouse National Science Contest prize when he was thirteen; then won an award for his participation in research on the immune system at the world’s largest cancer research center at the age of sixteen, and did research on programmed learning and Skinnerian techniques at Rutgers University’s graduate department of education before entering his freshman year of college, after which, in 1968, age 25, he completed a bachelor’s degree at NYU, in the area of psychology. He then turned to the art and music industry.

In 1988, Bloom retired from 17-years of work in the music publicity business (Ѻ), owing to home-bound illness (chronic fatigue syndrome), after which he turned to science writing, themed on: evolutionary psychology, sociology, lay science, and atheism themed religion. (Ѻ)

“The first rule of science is the truth at any price including the price of your life. That rule also applies to morality.”

— Howard Bloom (2012), The God Problem: How a Godless Cosmos Creates

“Everyone knows that the second law of thermodynamics is gospel. Including everybody who is anybody in the world of physics, chemistry, and even complexity theory.”

— Howard Bloom (2012), The God Problem: How a Godless Cosmos Creates

“Einstein grabbed me by the lapel when I was 12 years old and he said, ‘To be a genius, it is not enough to come up with a theory only three men in the world can understand. To be a genius you have to be able to express it so clearly that anyone with a high school education and a reasonable amount of intelligence can understand it.’ Those were my marching orders since I was 12: Write compellingly and deliciously.”