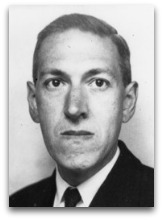 Lovecraft, in his discussions of atheism, expounded his belief in a meaningless, pointless, purposeless universe; the following is an example:

“Today we know that the cosmos is simply a flux of purposeless rearrangement amidst which man is a wholly negligible incident or accident.”

The materialistic views of Hugh Elliot, as found in his Modern Science and Materialism (1919), according to Sunand Joshi (2014), were a huge influence on Lovecraft. [4]

Atheism
From 1916 to 1932, Lovecraft penned a number of letters to various individuals on the various subjects related to atheism against religion, e.g. unfaith, insignificance of man, idealism, materialism, ethics, and spirituality. [1]

Influence
The atheistic arguments of Lovecraft were an influence to Sunand Joshi, who began to read his work at age 13.

Quotes | By
The following are noted quotes by Lovecraft:

“Space and time have always existed and always will exist. This is the only legitimate axiom in all of philosophy.”

“How do we know that that form of atomic and molecular motion we call ‘life’ is the highest of all forms? Perhaps the dominate creature—the most rational and god-like of all beings—is an invisible gas. Or perhaps it is a flaming and effulgent mass of molten stardust. Who can say that men have souls while rocks have none?”

“I admit that I am very much interested in the relation I bear on the things about me—the time relation, the space relation, and the causative relation. I desire to know approximately what my life is in terms of history—human, terrestrial, solar, and cosmical; what my magnitude may be in terms of extension, -- terrestrial, solar, and cosmical; and above all, what may be my manner of linkage to the general system—in what way, through what agency, and to what extent, the obvious guiding forces of creation act upon me and govern my existence. And if there be any less obvious forces, I desire to know them and their relation to me as well.”

“Morality has nothing to do with any particular form of religion. Morality is the adjustment of matter to its environment—the natural arrangement of molecules. More especially it may be considered as dealing with organic molecules. Conventionally it is the science of reconciling the animal homo (more or less) sapiens to the forces and conditions with which he is surrounded.”

“Realistic analysis, favored by history and by diffusive scientific leanings which now embraced Darwin, Haeckel, Huxley and other various other pioneers, was checked by my aversion for realistic literature. I ceased my literal adherence to Epicurus and Lucretius, and reluctantly dismissed free-will forever in favor of determinism. The Peace Conference, Friedrich Nietzsche, Samuel Butler, Henry Mencken, and other influences have perfected my cynicism.”

“My attitude has always been cosmic, and I looked on man as if from another planet. He was merely an interesting species presented for study and classification.”

“All I say is that I think it is damned unlikely that anything like a central cosmic will, a spirit world, or an eternal survival of personality exist. They are the most preposterous and unjustified of all the guesses which can be made about the universe, and I am not enough of a hair-splitter to pretend that I don't regard them as arrant and negligible moonshine. In theory, I am an ‘agnostic’, but pending the appearance of radical evidence I must be classified, practically and provisionally, as an ‘atheist’. The chances of theism’s truth being to my mind so microscopically small, I would be a pendant and a hypocrite to call myself anything else.”

“All notions of cosmic consciousness and purpose, and of the importance of man in the limitless pattern of the universe, are plainly myths born of the imperfect information of man’s early days.”