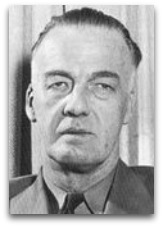 In hmolscience, Howard Scott (1890-1970) was an American self-defined engineer noted, in economic thermodynamics, for his 1920 to 1932 efforts to technical-theory base bureaucracy, which he called "technocracy", according to which the country would be run on use of “energy certificates” instead of money as units of value; the gist of which was superficially said to be themed or based on some aspect of the work of Willard Gibbs.

Overview
In 1920, Scott assembled a group architects, engineers, doctors, etc., into a technology-based (science-based) group of economic advisors called Technocracy. One of their many thermodynamic-based economic theories was the use of “energy certificates” instead of money as units of value. [3] Another term was “Technate” used to describe the region over which a technocratic society would operate using thermodynamic energy accounting instead of a price system (money) method.

Scott claims to have derived his theory of “energy accounting”, a system of distribution in which the energy used to produce and distribute goods and services consumed by citizens is recorded, in large part from the work of Willard Gibbs. Scott’s early theories on energy determinates were also similar, to significant extent, to the equality of energy, money, and wealth in the 1926 book Virtual Wealth and Debt by English physical chemist Frederick Soddy. When questioned as to what influence Soddy had his theory of his theory of "energy determinants", Scott replied: [2]

“We derive most of our concepts of thermodynamics and energy determinants from the works of J. Willard Gibbs, and we had formulated most of our concepts of modulus and calculus of design prior to our coming in contact with Soddy's Wealth, Virtual Wealth and Debt in 1927. Frederick Soddy was a chemist and scientist, completely unknown to us, as we were unknown to Soddy. Soddy formulated his ideas in the British scientific and academic world of his time. He starts out on the correct course, and then gets lost in the muddle of values shortly after page 100, and he loses his original direction and analysis in the mass of money and economic values. Soddy himself, in a newsreel interview taken in his office and laboratory, presented in the early 30's a very nice admission and commendation for the development of Technocracy in the United States. This newsreel, I believe, was a Fox Movietone. We wish Soddy had gone on as he first started, as a chemist and thermodynamicist and we feel that he would have reached, ultimately, the same conclusions we had arrived at.”

A reading of Scott's Technocracy Study Course, however, shows that Scott only had a very superficial passing knowledge of the work of Gibbs.

In 1932, Scott, in his Technocracy: a Thermodynamic Interpretation of Social Phenomena, seems to arrive at the view, using Gibbs' 1901 Elementary Principles in Statistical Mechanics, that society is a gas phase statistical ensemble and that the objective of a science-based-economics is to determine arbitrary energy units to predict the “next most probable state”. [4] On the logic of Scottish engineer James Watt’s 1782 definition of horsepower, meaning that a horse can do 33,000 foot-pounds of "work", i.e. lift weight vertically via a pulley, per minute, Scott gives a crude value of manpower in stating that:

“Technology has introduced a new methodology in the creation of physical wealth. It is now able to substitute energy for man hours on the parity basis that 1,500,000 foot-pounds equals one man's time for eight hours. National income under the Price System consists of the debt claims accruing annually from the certificates of debt already extant. Physical income within a continental area under technological control would be the net available energy in ergs, converted into use-forms and services over and above the operation and maintenance of the physical equipment and structures of the area.”

The obvious difficulty in Scott's reasoning, here, is that some people are more efficient or creative at doing work than others. Thus, using tools and creativity, for instance, one man might conceivably do 1,500,000 foot-pounds of work in one hour. Moreover, it is difficult to equate various types of "intellectual work", e.g. the work done by British physicist Stephen Hawking in the development of his black hole theory, "household work", e.g. the work of a wife carrying for a child, or "executive work”, e.g. a CEO approving a new corporate direction, to the energy expended in lifting buckets of water out of coal mines.

Education
The educational background on Scott seems to be non-existent; it is difficult to say exactly even if he even had a degree in engineering (which he probably didn't).

Further reading
● Anon. (1934) Technocracy Study Course: an Outline of those Elements of Science and Technology Essential to an Understanding of our Social Mechanism; an Analysis of the Price System; Technocracy’s Social Synthesis (275-pgs). Technocracy Inc.