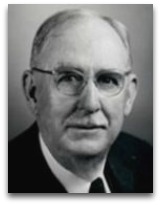 In hmolscience, Howard Washington Odum (1884-1954), not to be confused with his sons ecologist Howard T. Odum and zoologist Eugene Odum, his other son), was an American sociologist, the intellectual patriarch of the Odum school, noted, in sociological thermodynamics, for his 1929 historical summary of the works of a number of the chiefs and leading social Newtons of mechanistic school of sociology, such as: Vilfredo Pareto (#3), Leon Winiarski (#4), Eugene Roberty (#34), Henry Carey (#8), and Wilhelm Ostwald (#15) in particular.

In 1929, Odum, in his An Introduction to Social Research, §2, §§: “Fallacies of Pure Analogy” (pgs. 48-49), digresses on the question of making “analogies between physical science and social sciences”, in respect to whether these are “pure analogy”, see: pure analogy fallacy (Ѻ), figurative, or real; then, after stating that the social sciences gain in the development of their methodology along with gains made in the methodology of the physical sciences, he gives the very-condensed "era" statement, which seems to be an attempt at abstracting the history of physical sciences based sociology, up to his day. This is a very interesting abstract indeed; thought, to note, it seems to be, in large part, a truncation of the mechanistic school portions of Pitirim Sorokin's richly-cited Contemporary Sociological Theories (1928), who discusses the works of some 1,000+ scholars, as Odum notes.

“Of the earlier analogies the theories which attempt to interpret social phenomena in terms of mathematics, physics, chemistry, and mechanics are perhaps the most noteworthy. They border on the philosophical approach in that they assume a socio-physical monism, and end in the unprovable [see: proof]. They border upon the modern objective approach in that they attempt to apply the method of the physical sciences to the social sciences.

Leon Winiarsky's mechanistic interpretation posits society as a system of points, individuals in perpetual movement, with attraction as the primary cause of movement. This attraction is like chemical affinity with mechanical bases but with a psychic force not present in the physical world, which, however, in turn is nothing more than a form of physico-chemical energy which in turn, in the form of life, may be transferred from potential to kinetic energy, and this transformation is primarily through the processes of alimentation and reproduction.

Human masses transmute energies of hunger and sex into various social, economic, aesthetic or intellectual forms, the transformation proceeding entirely according to the laws of thermodynamics.”

This last statement is replete. Give or take a few issues, no one, seemingly, has surpassed Winiarski in general clarity and correctness of approach; which only evidences why he is currently the #4-ranked social Newton (SN:4). Odum continues:

“Society and human beings will ultimately reach an equilibrium in some such way as the physical world has reached its equilibrium and social science must devise objective units of studying this energistic system of humans in relation to their world.”

Here, firstly, we see Odum, in Winiarski context, discussing the so-called "unit problem". Secondly, his take on the "equilibrium view" is conceptually off; Odum seems to have gleaned an sort of Spencerian dilemma view of things, so to say; whereas, correctly, equilibrium, in socio-physical monism terms, is more along the lines of the chemical peneplanation model outlined by Harold Blum (1934). Odum continues:

“Eugene Roberty (SN:41) in his energetisitic theory considers three fundamental forms of energy as composing the world as we know it: the physico-chemical or inorganic with the molecule as the unit; the vital or organic whose essence is the cell; and the social or superorganic centered in the brain and nervous system. These merge one into the other in an almost imperceptible way. The superorganic elements constitute the "highest forms of psychical phenomena" with "thought" and "abstract knowledge" as the fundamentals.

Next we see Odum digging into the great Henry Carey (SN:9)

Henry Carey, in his comparison of social processes with physical mechanisms, maintains that the same laws govern in the social and economic world as in the physical. He regards man as a sort of molecule of society. Thus human molecules gravitate toward one another through association, which generates heat, which produces motion, which in turn constitutes progress. This gravitation is measurable through physical laws of direct ratio to mass and inverse ratio to distance. Forms and process such as centralization and decentralization come about through the operation of centripetal and centrifugal forces with association and progress varying inversely as the differences between units and groups of population.

Then he digs into German physical chemist Wilhelm Ostwald (SN:18):

Wilhelm Ostwald's energetisitic theory interprets all social and historical change as a transformation of energy. Science, which is the most fundamental tool of man for the utilization of energy, is the basis of civilization, for the transformation of crude energy into useful energy by means of adaptation results in language, law, commerce, government, etc., i.e. culture. Society is merely an arrangement whereby man transforms all other forms of energy through effective organization for the better utilization of crude energy. Therefore, the value and justification of concentrated forms of energy, such as a state or social institution, may be measured by the utilization of this energy for the benefit of all its members.”

Ostwald, of note, will likely climb higher in social Newton rankings, e.g. his "Monistic Sunday Sermons" were recently unearthed, in part (in English); however, that most of his work is in not yet translated from German to English, slows his rank climbing.

In 1929, Odum, in his An Introduction to Social Research, co-written with Katharine Jocher, outlined the methodology of applying physical science methods in social research. In his section on mechanistic approaches in sociology, Odum summarized the work of Leon Winiarski, Eugene Roberty, Henry Carey, and Wilhelm Ostwald. [2] On Winiarski’s theory, Odum comments:

“Human masses transmute energies of hunger and sex into various social, economic, and aesthetic or intellectual forms, the transformation proceeding entirely according to the laws of thermodynamics.”

On Carey, for example, Odum summarizes:

“Thus human molecules gravitate toward one another through association, which generates heat, which produces motion, which in turn constitutes progress. This gravitation is measurable through physical laws of direct ratio to mass and inverse ratio to distance. Forms and process such as centralization and decentralization come about through the operation of centripetal and centrifugal forces with association and progress varying inversely as the differences between the units and groups of populations …”

Teleology
Odum, of note, devotes a certain amount of covert discussion to what seems to be a belief in teleological underpinnings; one example includes:

“Social research, again, involves the general telic implications of all scientific method as well as its own science of social implications.”

Quotes | Employed
The following are quotes employed by Odum:

“All change in the organic as well as in the inorganic is the result of law.”

“The first aim of natural science is to discover the motive forces and the motions underlying all alteration, whereby resolving itself into mechanics.”

“It would be a boon to interpretation of human experience if we could rise up in our might and destroy the whole miserable trumpery of mechanical partitions between the social sciences, and leave ourselves in the stark presence of social problems. We should then no longer confuse issues by incessantly demanding of one another: Are you of psychology, or of history, or of economics, or of sociology? We should at least keep a little nearer to reality by inquiring: Have you a problem? What is it? How do you go about it? How do you connect it up with all the other problems that are closing in on the mystery of life?”

“For the joy of scientific discovery men have surrendered the comforts of home, rejected opportunities of wealth, risked and lost their lives.”

“Scientific men can be distinguished into two categories: those who ‘display a burning desire to see more and more of the eternal truth’ and those who ‘stop on the way to find its practical application’.”

“Among the more earnest students of social life there is a growing realization of the inadequacy of our knowledge and a growing feeling that all is not well with the social sciences. While our electrical, mechanical, and civil engineering technique apparently conquer all obstacles, our social engineering technique is in its infancy and largely guesswork. The social sciences have not reached as yet that cosmopolitan nature which is characteristic of the natural sciences. Physics and chemistry are international, but the social sciences carry a distinct mark of nationality. American, English, French, German, and Russian sociology, each has characteristics of its own. It is therein that they show most clearly their limitations and announce to the world how far they are removed as yet from that absolute scientific objectivity which is the aim of every scientist.”

“Man finds himself in a world which must be understood in order to be controlled. His world of experience is constantly changing from moment to moment. The effort of science is to understand the mechanism through which phenomena take place; that is, all occurrences. Hence, science is the method of solving the more complex problems of experience which man has worked out though his intelligence.”

“No law which commands obedience and threatens punishment is a scientific law. Such a thing is the very essence of pseudoscience. We shall never get a clearer definition of pseudoscience than this: whatever represents either science or the forces of nature, as a sheriff’s posse waiting to nab us at the crossroads, a quackery and no mistake. Subject matter makes no difference. Authorship makes no difference. If we say that it as a law of mathematics that that whosoever says two plus two equals five will be arrested for falsification of accounts, we are nature-fakers. Mathematics says nothing of the kind. The laws of mathematics are just as serviceable to swindlers as to everybody else. It is we who are squeamish, not science.”

“In the days of Aristotle, Plato, and Pythagoras, philosophy still embraced the exact, natural and social sciences. At the beginning of the nineteenth century the exact and natural sciences — mathematics, astronomy, physics, chemistry, geology, biology — had already left their philosophical matrix and were rapidly developing their own methods and techniques, while preserving a tendency to return to philosophy for an occasional theoretical and speculative rehauling. But the social sciences — history, ethics, law, economics, psychology, religion, esthetics, anthropology (such as it was) — were still rocking in the metaphysical cradle of mother philosophy.”

— William Ogburn (1927), The Social Sciences and Their Interrelations [5]

“Fortunately for the social sciences, the ‘organismic theories’ of society and the state were usually so far-fetched as to exert but a passing influence on social thought. The specter of Hobbes’ Leviathan haunted us but for a moment. Spencer’s elaborate ‘analogies’ were soon discarded as dialectic fireworks, while Paul von Lilienfeld’s mercilessly pedantic tomes were criticized so little only because they were read even less.”

“The unity of all science is not only the old unity of merely organic analogy, but a very real unity of relationship and of essential law and development. It is the unity which reflects universal law and causal relationships in all phases of life, social and physical and in the ‘inanimate’ world. Because causal relationships have not been so clearly worked out in social phenomena or because laws have not been perfected is in no sense evidence that they do not exist.”