In symbols, Hu is a chemical letter (or chemical alphabet) stylized shorthand for one human, conceived as a “human element”, aka “The Human Element”, as Dow Chemical popularized the symbol in a series of 2006 launched commercials, or one human molecule, depending.

“One of the first steps was a creative meeting at our agency during the “pitch process.” I walked into the meeting with a new element for the periodic table. . . not carbon, hydrogen or oxygen, but the Human Element. That pretty much put everything in motion. Including the Human Element on the Periodic Table of the Elements changed the way Dow looked at the world and the way the world looked at Dow. Every creative decision we made from that point on was filtered through the lens of the Human Element, and that’s what took us down a very non-science approach to science advertising.”

Elemental #
The following are other Hu images:

The element number 08, in the original sketch, as shown above, symbolic of oxygen on the periodic table, seems to be an intuitive grasp at the premise that humans are "carbon-plus" types of elemental things, carbon being atomic number 6 on the periodic table; hence, the numbers 8, 9, and 10, often seen on mock-designs of the Hu element theme concept, a human is an elemental thing "above" element number 6.

The following is a Feb 2020 symbol made by Libb Thims, for new business cards, shown below representing the knowledge that humans are 26 element chemical species (26E), and that the current population is 7.8 billion or 8E times 10 to the power of 9, rounded up (correctly this should be a measure in hmol units, but his has not yet become a working concept): 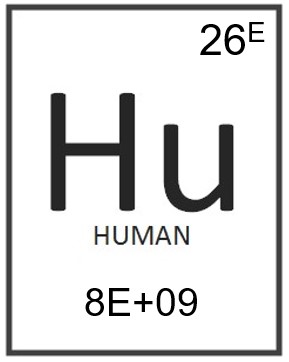