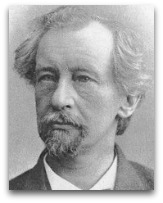 Overview
In 1901, De Vries, based on experiments conducted with Oenothera Lamarckian (Evening Primrose), put forward a new evolution theory according to which new species are not formed by continuous variations, but by sudden appearance of variations, which he named “mutation” (TR:17), along with the term "mutant" (Ѻ), which are random and directionless, as opposed to Darwin’s variations, which are small and directional; de Vries suppositioned that these mutations are heritable and persist in successive generations. [1]

De Vries, as summarized by Howard W. Odum (1929), in short, formulated a theory according to which “novel characters”, appear suddenly without any parental linking. Such variations are of two kinds: inheritable, called “mutations”, and non-heritable or fluctuations, the latter of which are due to the environment and have little permanent value. [2]

De Vries assertion that humans arose from mutation has resulted in conflicts with religious beliefs; the following being the main seven compounded or aggregate non-theistic colloquial objections to evolution theory:


In short, according to the above general model, humans are a "lucky | accidental | random | chance | mutation | blind | fortuitous | concourse of atoms" derived entity; the following are example statements:

“To think that we just evolved from a bang, that we used to be monkeys, that seems unbelievable when you look at the complexity of the human body …. If you tell children there is no purpose to their life—that they are just a chemical mutation—that doesn’t build self-esteem.”

“The evolution of plants and animals? Perhaps other geologists also have questions about the mechanism of mutation (which varied its rate of effectiveness greatly in rocks), whether the ability to propagate is the difference between a fossil and its ancestor, how many such evolutions must occur before 'bad luck' is overcome and the newer variety replaces the older, which evolved features are not for propagation but just 'ride along' on the genetic material by a coincidental juxtaposition of genes, and - most importantly - whether 'good luck mutations' can occur fast enough to account for the fossil record.”

The term "mutation" seems to crop up in purpose vs purposeless models of the universe debates and discussions. David Foster, e.g., has argues against “blind random chance mutation interpretations” of mutation-based Darwinism. Those who have theorized about mutation and entropy include: Pierre Levy, John Sanford, and the 1997 gentropy authors V. K. Savchennko and U. K. Sauchanka.

Quotes | On
The following are quotes on de Vries

“Physiologic facts concerning the origin of species in nature were unknown in the time of Darwin. . . The experience of the breeders was quite inadequate to the use which Darwin made of it. It was neither scientific, nor critically accurate. Laws of variation were barely conjectured; the different types of variability were only imperfectly distinguished. The breeders' conception was fairly sufficient for practical purposes, but science needed a clear understanding of the factors in the general process of variation. Repeatedly Darwin tried to formulate these causes, but the evidence available did not meet his requirements. Quetelet's law of variation had not yet been published. Mendel's claim of hereditary units for the explanation of certain laws of hybrids discovered by him, was not yet made. The clear distinction between spontaneous and sudden changes, as compared with the ever-present fluctuating variations, is only of late coming into recognition by agriculturists. Innumerable minor points which go to elucidate the breeders' experience, and with which we are now quite familiar, were unknown in Darwin's time. No wonder that he made mistakes, and laid stress on modes of descent, which have since been proved to be of minor importance or even of doubtful validity.”