In human chemistry, a human chemical reaction is a change in which one or more human molecules (people) or human molecular compounds (aggregates of people), technically what are termed the reactants, form or rather chemically transform into a new compound or human molecular structure, the products, through a process of either synthesis (coming together) or analysis (taking apart). [1]

The first to work out the "theory" of human relationships and interactions viewed as chemical reactions, forming bonds and breaking bonds, was German polymath Johann Goethe, beginning originally in terms of verbal commentary in 1796. Goethe likely, as has been speculated, was the first to draw out human chemical reactions, in the William Cullen reaction diagram style:

where A, B, and C are people or chemicals, depending on discussion, the crotchet is a chemical "union" or bond, depending, and the arrow or "dart" is the chemical affinity force, in preparation for the writing of his 1809 Elective Affinities; although the fact that he destroyed all his manuscripts and notes to this novella, contrary to his usual practice, leaves the question unresolved. [5] The best verbal example from the novella comes from his famous chapter four. Goethe's reaction theory was followed by Jeremy Adler (1969), Libb Thims (1995), Christopher Hirata (2000), David Hwang (2001), Chanel Wood (2007), and Surya Pati (2009), among others.

“There are men who would be better off in a small village than in a large town, if you had some sort of human chemical reaction to determine in advance which man's nature was suited to the smaller place and which to the larger.”

The following is a related famous 1933 quote by Swiss psychologist Carl Jung on this topic: [4]

“The meeting of two personalities is like the contact of chemical substances; if there is any reaction, both are transformed.”

“Marital relationships are chemical in nature, the result of natural human reactions.”

“There are certain people we dread to meet because whenever we talk with them our ideas clash. Hard as we try, we cannot seem to avoid becoming argumentative, if not positively combative. We realize that it is our strongly held personal opinions for which produce uncomfortable reaction—for that is what is what it is—a human chemical reaction.”

Overview
The modern interpretation, in which people are viewed as molecules, of the older "love the chemical reaction" view of life and romance, in which human interactions are described in mechanistic terms, just as in a standard chemistry textbook. The following is another description by Dreier, in which a pair, each married at the time, met and fell in love, both getting divorces and remarrying each other: [3]

“Here two persons reacted as certain as powerful chemicals react when united. We need not pass on the rightness or wrongness of their action to recognize the inevitability of strong reactions to certain human chemical combinations.”

The detailed understanding of what constitutes a human chemical reaction is very difficult subject, which is not easily discerned on first pass. A very simple reaction is the combination reaction, in which two un-acquainted people, A and B, meet in time, fall in love (as in “love the chemical reaction”), and transform into a bonded relationship or couple AB. This is depicted by the following chemical equation:

When reactions become more complicated, however, many unseen factors begin to accrue, such as coupling effects, and second-by-second exchanges in the mechanism. To even begin to describe human interactions in terms of basic chemical reactions is very difficult. Americans biologist Lynn Margulis and science writer Dorian Sagan, in their 1997 book What is Sex?, for instance, try to describe sex via a crude chemical equation. They ask “why do we scientists ignore the basic arithmetic of live?” In answer to this, they state “in biology 1 + 1 does not equal 2, but rather 1 + 1 = 1, as in sperm (Sp) plus one egg (Eg) equals one fertilized egg.” [2] In chemical reaction terms, their hypothetical formula amounts to:

In which the EgSp represents a fertilized egg. The conclude “is this why our efforts to predict sexual behavior with fancy computer models are bound to fail?” In more detail, however, the full mechanistic analysis of what constitutes the energetics and movements associated with sex is more involved, as detailed in the next section.

Using this diagram, the person in the video draws the sperm, with a head and a wiggle tail, moving from the male ♂ to the female ♀ and describes how “latex” can block the progress of the reaction. The speaker also incorrectly uses a two-way reversible reaction arrow to define the sex/reproduction reaction. The correct formulation is to use a one way arrow, signifying that the formation of an embryo and later an infant is an irreversible process. If, however, the couple or female decided to opt for an abortion, a completely different reaction mechanism would be used.

The core reaction in human life, through which 85% of people go through is a reproduction reaction (double displacement reaction) in which two people, A and B, react over the course of a number of years to form an attached couple A≡B and an new child C, the overall mechanism of which is shown below:

The detailed mechanism of the human reproduction reaction involves a day-by-day accounting of the germ cells, as they are exchanged between partners, and slowly form into a embryo, then into a child, which for a dozen years or more remains attached to the parental structure, then begins to detach. Technically, the basic reproduction reaction, in which one child is conceived and raised into adulthood, in mechanistic terminology, is what is called a double displacement reaction, of the form shown below:

In human chemical terms, a man Mx parts with the genetic component of his sperm Sp; a woman Fy parts with the genetic component of her egg Eg; and they both emerge newly ‘transformed’ after the birth of their child, in the form of a new molecular structure, i.e. parents bonded into a working chemical relationship MxFy with an attached embryo SpEg uniting them:

Soon thereafter, still being attached significantly to the parental structure MxFy, the sperm-egg molecular entity SpEg, in the shape of what is called a morula, i.e. a globular solid mass of blastomeres formed by cleavage of a zygote, will begin to transform or grow into the structure of a young child Bc. Given time, the child will eventually begin to detach, in a predominate manner, from the parental structure:

In this manner, the newly created human molecule Bc will go off into the world as a newly formed individual. As we see, human chemical reactions are quite intuitive and very easy to depict. Do note, however, although simplistic-looking, these human chemical reactions actually embody principles and theories far greater in complexity and extent than can be detailed in this short book. It must be understood that the second-by-second mechanism underlying the above expressions, invariably, need to be explained in terms of only two components: electrons and photons. To do this is quite a tedious process and many new perspectives on life must be digested.

Types
The following are some basic reaction types:

The actual description of which requires a detailed analysis of material and energy exchange and change of relationships per reaction.

Realism | Fiction
In 1809, German polyintellect initiated the field of realism fiction with his human chemical theory based novella Elective Affinities.

In 2009, writer Shara Azod, in the novel Chemical Reaction, the cover (adjacent) showing a chemical structural formula "overlay" method, on top of two people in passionate love making, with fire at the bottom indicating that heat is involved in some way, and that the process is a human chemical reaction. The book description is as follows: [9]

"Dr. Ezekiel Soren has encountered an odd chemical attraction. He wanted Shana Wilkins so bad he can't concentrate on his precious research. The woman stayed firmly implanted in his cerebral cortex no matter what he did. It was past time that he experimented a little. He and Ms. Wilkins will simply have to combine to explore what could be the chemical reaction."

Azod states that he worked at a medical school for 6 years. It was the inspiration. [10] 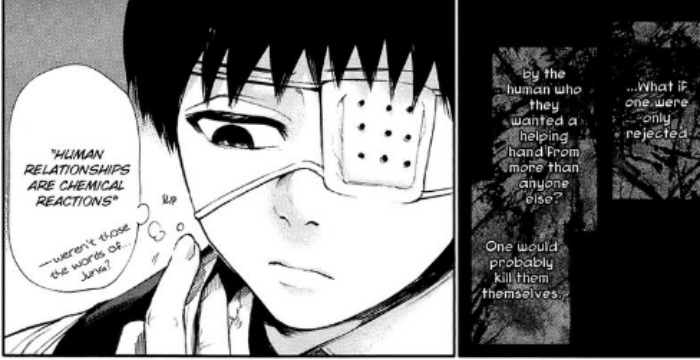 after which, Kaneki engages with Touka Kirishima, the female lead character, as follows: 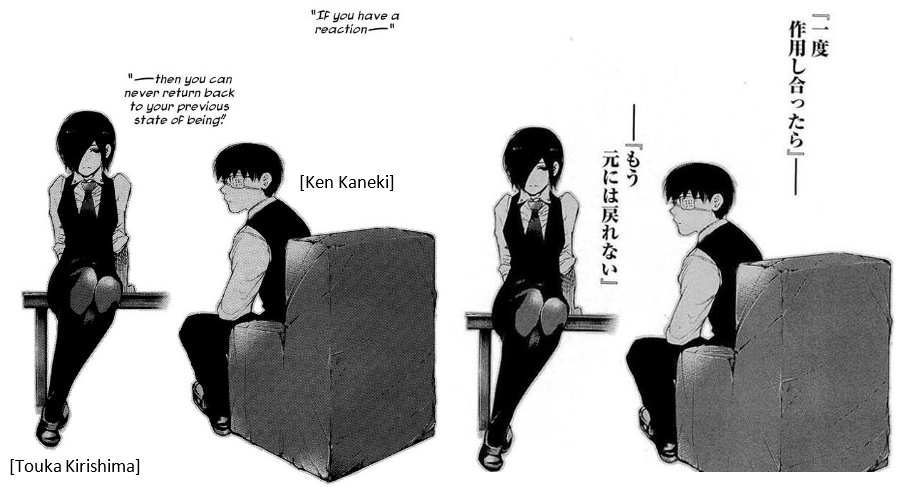 This ripe quote, reminiscent of John Tukey’s 1966 free energy attitude states theory, has since blossomed off into a number of quote box visuals. (Ѻ)(Ѻ)(Ѻ)(Ѻ)

“At our most elemental, we are not a chemical reaction, but an energetic charge. Human beings and all living things are a coalescence of energy in a field of energy connected to every other thing in the world. This pulsating energy field is the central engine of our being and our consciousness, the alpha and the omega of our existence.”

This, however, is a new age "energy" stylized ontic opening, and therefore incorrect. [12]

“There are men who would be better off in a small village than in a large town, if you had some sort of human chemical reaction to determine in advance which man's nature was suited to the smaller place and which to the larger.”

“What is democracy but a successful formula for controlling the chemical reactions of our 145,000,000 people, and turning the friction and heat generated by our living together into production and progress?”

“When a woman makes you wait for sex you are not her highest priority. Sexuality is spontaneous chemical reaction between two parties, not a process of negotiation.”