In human chemistry, a human periodic table is any of a number of, typically analogy-based, depictions of human arraigned on in rows that repeat periodically by way of their properties, similar to a standard periodic table of elements.

Overview
In circa 1900, English chemist Henry Roscoe gave an analogy between the newly forming ideas on the periodicity of the elements and the periodicity of human lineages; the gist of which being summarized by Henry Bray (1910) who said that Roscoe said somewhat as follows: [4]

“Let us in our minds write on our mental blackboard the names of the Englishman Newlands, the Frenchman Dumas, the German Meyer, and the Russian Mendeljeff, all written in a horizontal line; next let us write beneath the name of each of these men the name of his father, and beneath that the name of his grandfather, and beneath that the name of his great-grandfather, and so on. If you now write opposite the name of each of these individuals the number of years since his birth, you will find the numbers will increase by a definite increment, namely the age of a generation, which will be approximately the same in all the families. There will be certain differences in the ages of the chemists themselves, but such differences will be little when compared to the period that will be found has elapsed since the birth of any of their ancestors. In these family-trees, each individual takes the place, as it were, of a chemical element: as each family is marked by certain peculiarities, so each group of atoms thus arranged show marked and unmistakable signs of a common origin.”

Bray continues, either as paraphrase or direct quote, that Roscoe elaborated on this as follows:

“In such a family-tree as we have mentioned, it may frequently happen that the history of some member of the family has been entirely lost. When such is the case it is not impossible, especially for a man like Francis Galton, to judge from the known history of the other members what the characteristics of the missing member of the family must have been. It is thus as to atoms. It was not long ago when Mendeljeff said that if certain vacancies in his tables of atoms were ever filled, they would have to be filled by elements possessing certain chemical and physical properties which he accurately specified. Since that time these vacancies have been filled, and by atoms or elements possessing the very properties which Mendeljeff said they would possess.

Galium was discovered by Lecoq de Boisbaudron, scandium by Nilson, germanium by Winkler; and these discoverers agree that the atomic, chemical, and physical properties of these substances agree exactly with those predicted by Mendeljeff. It sometimes happens that the real parentage of an element has been lost altogether, but a careful examination frequently enables the chemist to restore it to the family to which it belongs.”

In 1948, American writer Thomas Dreier, in his We Human Chemicals, gave the following "human periodic table" like cover design: 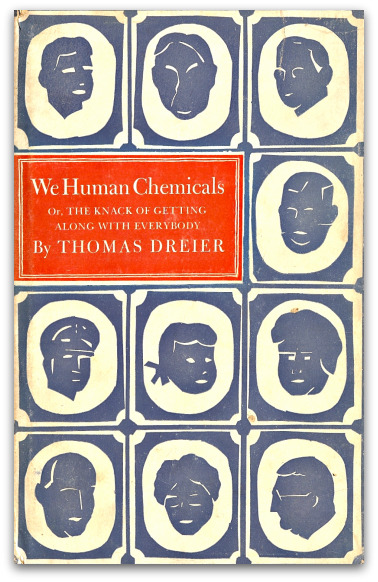 In 2003, Mil Millington, in his novel A Certain Chemistry, used the following cover design: 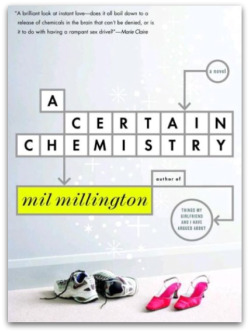 Discussion
The more correct way to arrange people chemically is using affinity, as was done by German polymath Johann Goethe, in his 1808 human affinity table, or using the equivalent concept of human free energy tables, as outlined in 2007 by American chemical engineer Libb Thims.


Social media elements periodic table
The following is a 2009 "periodic table of the social elements" by Internet writer Rick Liebling, which is based on the logic that: [2]

“Social Media really is a lot like chemistry. There is a huge pool of elements you can choose from and an infinite variety of combinations you can create. Twitter + sharing +commenting will give you a different result than blogging +LinkedIn+ Flickr. Then of course there are the active ingredients -the people.”

Each grouping of "internet elements" is grouped by color, e.g. yellow are "Twitter people", orange are "YouTube people", etc., such that people are grouped by their reactivity or rather properties as defined by which social site he or she frequents: 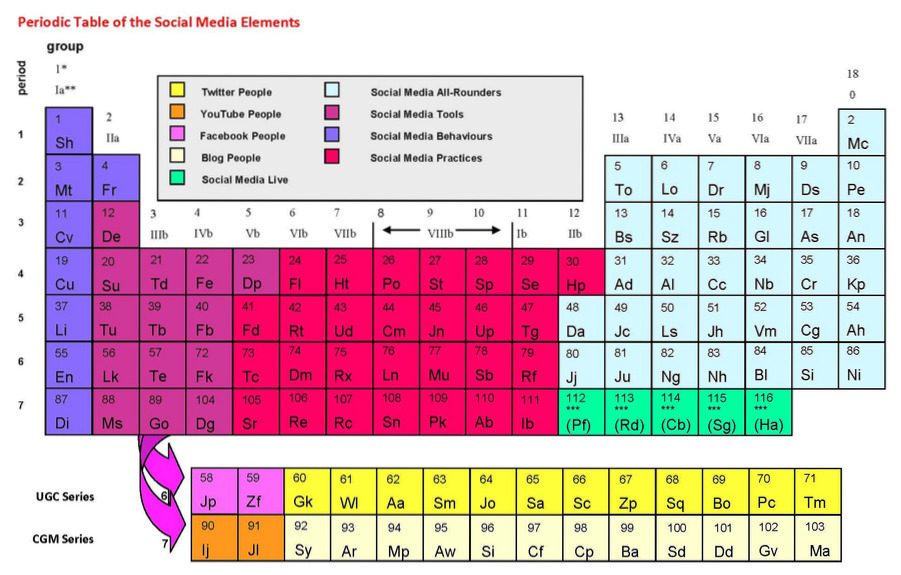 Human elements
The following is "human element" properties table (yellow) found on a the site GoldHunter.org (active from 2007-2008) shown with one of the famous 2006 Dow Corning human element (Hu) advertisements: [3]