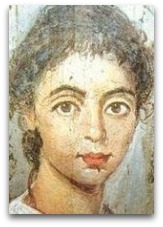 In existographies, Hypatia (350-415) (IQ:190|#38) [RGM:123|1,500+] (GFG:1) (CR:38) was a Greco-Roman Alexandrian philosopher, mathematician, physicist, and astronomer, the only known female universal genius, daughter of mathematical astronomer Theon, the last head of the Library of Alexander, noted for being one of the last apex intellects before humanity went into the dark ages.

Science vs religion
Hypatia was one of the first to take a stand against religion and to side with science. She made public statements against organized religion, such as: [1]

“All formal religions are delusive and must never be accepted by self-respecting persons as final.”

Hypatia, owing to her controversial anti-Christian views, was infamously stripped naked, beating with clam shells, stoned, dismembered, and burned alive (existive) by a mob, led by Peter the Lector, as depicted below: (Ѻ)

“Life is an unfoldment, and the further we travel the more truth we can comprehend. To understand the things that are at our door is the best preparation for understanding those that lie beyond.”

“Reserve your right to think, for even to think wrongly is better than not to think at all.”