In genius studies, IQ:200+ HCT prodigies refers to prodigies, namely: Goethe, Tesla, Sidis, Neumann, Hirata, and Arroyo, cited, independently, with an IQ in the 200 range AND who have "independently" arrived at a human chemical thermodynamics (HCT) theory or variant (e.g. "this idea"). [N1]

List
The following is a listing of IQ:200+ cited thinkers who have independently produced HCT theory. The "discovered" dates listed are the dates when Libb Thims, who derived his own HCT theory in 1995, became aware of these various 200-range IQ thinkers, during his research (see: footnote 2.5), the first two of which being Goethe (2005) and Sidis (2008). IQs shown below, to note, are cited by others (not Thims). Names bolded (Goethe, Hirata, and Thims) are the most pure form of human chemical thermodynamics. Sidis and Hirata, of commonality, are the youngest IQ:200-range thinkers to derive HCT theory. Thims, unusual to practice, for the sake of homogeneity, includes himself in the following list. [N2]


The following are are 175+ IQ guesstimated prodigies, without specific IQ citation, but with similar independent HCT theory:


The above infoboxes show, seemingly, that if one is a coming of age prodigy in the IQ:200± range (and or 175+ range) intellect, one's mind will "naturally" gravito-electro-magnitate towards a chemical thermodynamics model of the existence of things, in one way or another, being that the first law and second law are what define "nature" of things, in modern terms.

“When two humans get together and make a new human, doesn't that increase the order of the universe?”

— Joe Hanson (2015), 1M-subscriber It’s Ok to be Smart (Ѻ) channel; post (Ѻ) to “Does Evolution Violate the Second Law of Thermodynamics?”; compare the views of prodigy Dean Wooldridge (1968), below, on this, Dec

History | Origin
Historically, Libb Thims was goaded into "IQ ranking" (and re-ranking) when on 17 Feb 2010, the "IQ of 400" citation for Adragon De Mello was found, and subsequently added (see: version 214) into Thims growing circa 2006 to present IQ:200+ collection; after which, the ranking of geniuses by purely "cited" IQs (below right) became mentally incongruous, no longer visually pleasant to look at, i.e. a nonsense ranking: 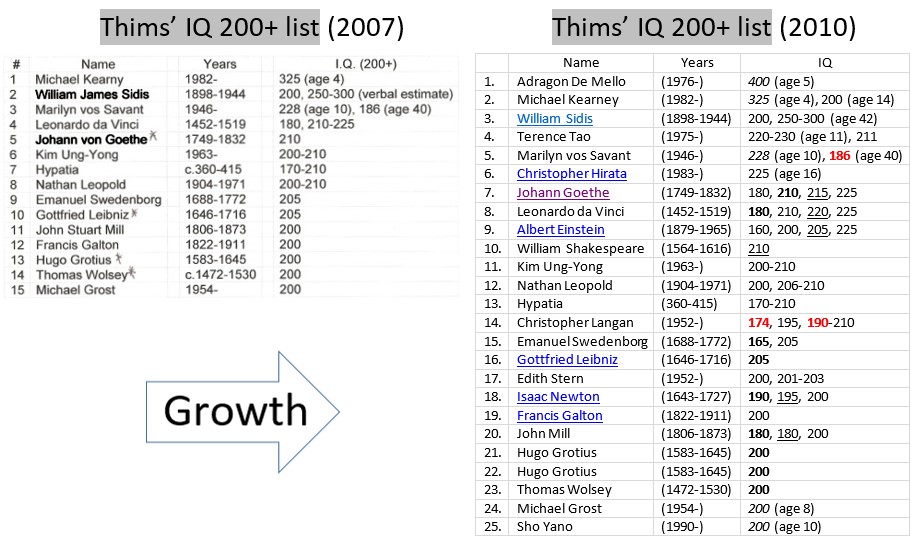 after which Thims was "forced" (see: self terminology reform quotes) into doing his owing re-rankings of ceiling range IQs, which resulted firstly in an Oct 2010 IQ:200+ video (Ѻ) series: 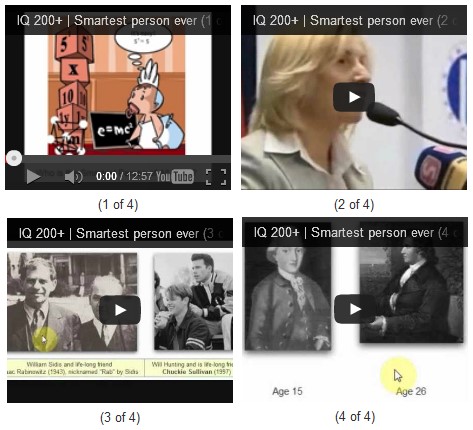 Then into the the genius IQs (24 Oct 2011) page, which then transformed eventually into the more-cogent five-part top 500 geniuses (Jan 2014) set of pages, ranked by real IQ (or true IQ), i.e. IQs that match up with reality.

Battle of the prodigies | History
In 2013, Thims, on the Christopher Hirata page, began ranking former child prodigy turned MIT triple major valedictorian Alexander Wissner-Gross against Hirata and Goethe after Wissner-Gross boasted to Thims that his new "casual entropic force" theory should be taken "more seriously" than Hirata's relationship physics theory. In 2015, Thims, after reading that Dean Wooldridge was a child prodigy, who, like Hirata (age 13), had graduated high school at age 14, expanded on the above former listing, of the so-called “battle of the prodigies”, to make an 8-person prodigy comparison, shown below:

listing eight noted theory related child prodigies, namely: Johann Goethe (1809|60), William Sidis (1916|18), John Neumann (1934|31), John Tukey (1966|51), Dean Wooldridge (1968|55), Christopher Hirata (2000|18), Luis arroyo (2010|20), and Alexander Wissner-Gross (2013|31), five cited with IQ:200+ range (Goethe, Sidis, Neumann, Hirata, and Arroyo), three of which cited in the IQ:225+ range (Goethe, Sidis, and Hirata), who into adulthood (age 18+) independently derived and or arrived at physiochemical, thermodynamic, and or chemical thermodynamics formulation one or more aspects of existence, date (age) of theory publication shown next to each name; Neumann’s theory, to note, not quite independent (but nevertheless original), being that it resulted following a request, by Abraham Flexner, to read and comment on Georges Guillaume's 1932 economic thermodynamics PhD dissertation. The GREEN box indicates theorists whose model is about the same, i.e. free energy / affinity based; the two related by the Goethe-Helmholtz equation (i.e. thermodynamic theory of affinity).

Note
N1. This page started (27 Nov 2016) as a paste from a section of the “IQ 200 or above impossible page” (Mar 2016), as mentioned in the Prodigies and Calculus video (15 Nov 2016) (Ѻ), which derived from the “battle of the prodigies” section of the Christopher Hirata page, which was added after MIT triple major valedictorian Alexander Wissner-Gross was boasting (2013) (Ѻ) that his “causal entropic force” theory should be taking “more seriously” than Hirata’s relationship physics theory, which derived from the Goethe and Sidis IQ:200+ noted commonality of Thims’ genius IQ folder (2007). This page, in short, is a more refined summary of the IQ:225+ page, homogenized with the newer inclusion of Luis Arroyo.
N2. Thims began to be cited (see: Thims genius rankings) with an IQ in the 200 range in 2012, albeit generally by association to Goethe, Sidis, and Hirata.