In genius studies, IQ state refers to the guesstimate, tested, and or gauged IQ of an individual in a given existive "state" of reactive existence or being; the IQ of a reacting person in a given intellectual period, e.g. month or year.

Landau
The following Landau genius scale, developed and maintained for personal reasons by Russian physicist Lev Landau (1908-1968), gives a cogent outline of the concept of "IQ state", namely in the in the 1940s and 1950s, or thereabouts, Landau considers his intellectual brightness to be a 2.5 on his own genius scale, but in 1962 on the win of his Nobel Prize in physics, his "IQ state" jumped to the 2.0 level, in his own mind, and in his later years he gauged his IQ state or genius stature ranking to be 1.5 on his scale, and in recent decades some, e.g. Lubos Motl (2008), have ranked him at the 1.0 level: 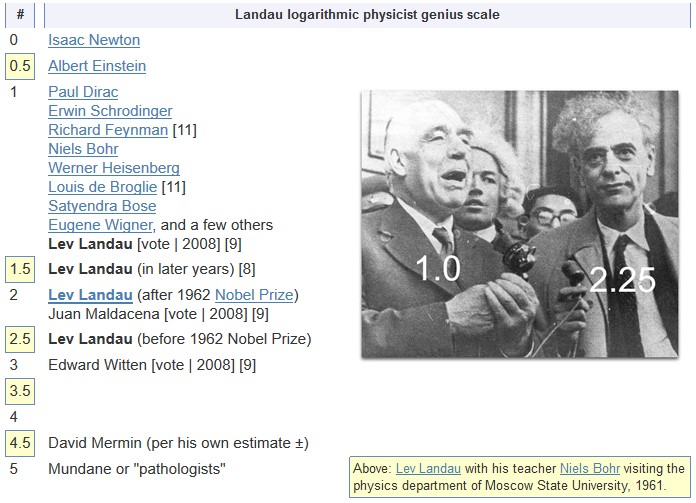 Russell | Uberman scale
In circa 1930, Bertrand Russell (1872-1970) grouped the following people to have had an IQ of 180 or above, that this group is representative of a future god theory replacing uberman, and moreover that he gauged his own IQ to be 180, i.e. his “IQ state”, in that decade: 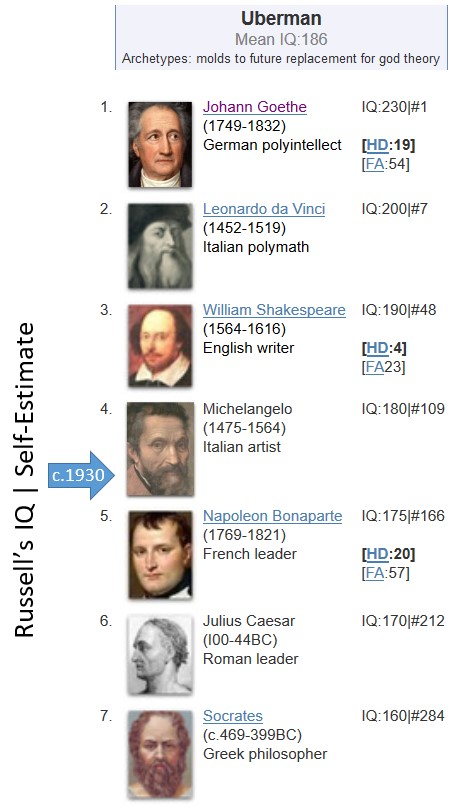 Thims | IQ state
In circa 2010 to 2015, American electrochemical engineer Libb Thims, in attempting to gauge his own IQ,similar to Russell, or genius ranking position stature, similar to Landau, frequently found that an "anchored" guesstimate position, e.g. on the genius IQs table or top 500 geniuses table, not only for himself but for other "existive" individuals, i.e. people still moving about the earth, as compared to more solidified classical geniuses, is difficult to mentally hold, per reasons that (a) the top 500 geniuses themselves are periodically shifting up and down the rankings, as more of their work is absorbed and processed in the light of growing knowledge, and (b) that an attempted ranking of oneself and or an existive person changes per period, e.g. day or month, according to which a shifting "IQ state" seems to be the only thing that makes any sense for existive individuals; such as the following scale indicates for Thims' Mar 2016 gauged scale position, i.e. below Gilbert Lewis: 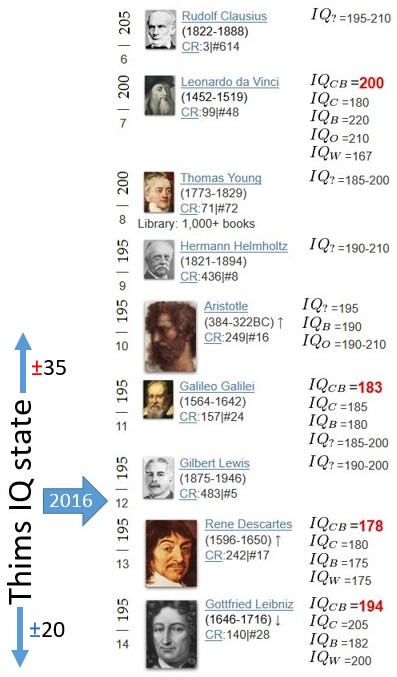