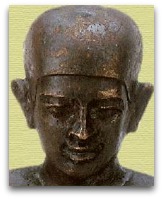 In science, Imhotep (c.2650–2600BC) (IQ:175|#215), called "Imouthes" by the Greeks, an Asimov great scientist (#1|1510), was an Egyptian polymath, first architect, engineer, and physician in early history, who served under third dynasty king Djoser (Zoser) as chancellor to the pharaoh and high priest of the sun god Ra at Heliopolis, architect of the world’s first pyramid, the Step Pyramid at Saqqara, who may be the possible main theorist behind the current world dominating Anunian theologies, namely" Ab-ra-ham-ic theologies (Christianity, Islam, etc.) + B-ra-hma-ic theologies (Hinduism, Buddhism, etc.) and in turn the clay creation myth model of a human and in turn the modern colloquial theory of life conception.

Imhotep has been characterized as a “Da Vinci, Michelangelo, Galileo, and Newton all rolled into one” (Ѻ)

Khnum
The Heliopolis creation myth holds that the sun (Ra) was born of the Nile soil (Nun); a latter variant of this held humans were formed in a similar manner, a conception which transformed into the model that that ram-headed god Khnum made people from clay, on his potter’s wheel, in the waters of the Nile.

Since the annual flooding of the Nile brought with it silt and clay, and its water brought life, shown via "green" color, below, signifying vegetable life, to its surroundings, Khnum was thought to be the creator of the bodies of human children, which he made at a potter's wheel, from clay, and placed in their mothers' wombs. [2]

One of the earliest mentions of Khnum associates him with the Nile flood: namely a third dynasty (2686-2613BC) inscription by King Zoser (Djoser) on the rocks at Sehel Island, near Elephantine (his main cult center), records a seven-year famine and states that Khnum would let the Nile flood once again if his temple was renovated.

Djoser was buried in his famous step pyramid at Saqqara. This pyramid was originally built as a nearly quadratic mastaba, but then five further mastabas were literally piled upon the first, each new mastaba smaller than the predecessing ones, until the monument became Egypt's first step pyramid. Supervisor of the building constructions was Egyptian polymath and high lector priest Imhotep—who served under the Third Dynasty king Djoser as chancellor to the pharaoh and high priest of the sun god Ra (or Re) at Heliopolis, who is considered to be the first architect and engineer and physician in early history.

Khnum’s height of power came in the years 332BC-395AD, during the Greek and Roman periods, centered at Elephantine Island ,where rams sacred to Khnum were mummified, elaborately wrapped, decorated with gilded masks, and placed in stone sarcophagi. [1]

“Imhotep was the most famous of all the non royals that ever lived in ancient Egypt. He was the world's first named architect who built Egypt's first pyramid, is often recognized as the world's first doctor, a priest, scribe, sage, poet, astrologer, and a vizier and chief minister, though this role is unclear, to Djoser (reigned 2630–2611 BC), the second king of Egypt's third dynasty. While there doesn't seem to be enough written about him to estimate his I.Q., I will go out on a limb and say it must have been 170 – 200.”