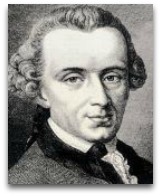 Mechanical Origin of the Universe
In 1755, Kant, in his Universal Natural History and the Theory of the Heavens: Essay on the Constitution and the Mechanical Origin of the Whole Universe according to Newtonian, building on Newton, Rene Descartes, William Whiston (Ѻ), Buffon, Richard Bentley (Ѻ)(Ѻ), Pierre Maupertuis, Wright of Durham, and James Bradley (Ѻ), attempted to provide an account of the formation of the entire known universe based on accepted physical principles. [17]

In c.1769, Kant, similar to what Voltaire had done before him, compared Adam and Abraham with Adimo and Brahma, and argued that Joseph was equivalent to Ganesha. [12]

Organic | Inorganic
In 1790, Kant, in his Methodical System of the Teleological Faculty of Judgment, divided all things in nature into “inorganic”, in which natural causes are said to prevail, and the “organic”, in which the active teleological, i.e. purposeful, principle of adaption is supposed to prevail. [1] In Kant’s mind there was a divide or cleft between the domain of primeval matter and the domain of life, for in the latter he assumes the presence of a supernatural principle, of final causes acting toward definite ends.

Thermodynamics
Kant had views on free will, a common issue in human thermodynamics, which he viewed to be under the guide of universal laws, and his 1785 “categorical imperative” seems to be the model of German chemist Wilhelm Ostwald’s 1912 “energetic imperative” and American physicist Robert Lindsay’s 1959 “thermodynamic imperative”.

Likewise, in the application of thermodynamics to evolution, this same divisional issue debate continues, for many scientists, making classifications such as animate vs. inanimate, living matter vs. non-living matter, or life vs. non-life, etc. From the modern 21st century molecular evolution table perspective, however, a view emerges that all motile structures are types of larger and larger molecules, e.g. bacteria molecule, human molecule, earth molecule, etc., and the view that there is such a thing as a “living molecule” concedes to the view that the theory of life is a defunct scientific perspective. [3]

Self-organization
In Kant’s 1790 Critique of Judgment, in his §65 "Things [Considered] as Natural Purposes are Organized Beings", attempts to argue for that an organized being, in contrast to a “mere machine”, such as a watch (which has only motive force), has “formative force” a type of self-organization force that propagates itself. [4] The following seems to be a related example of Kant's views here:

“A living organism is both cause and effect of itself.”

Science writer Robert Frenay argues that that this was the first appearance of the term “self-organization”. [5]

Quotes | On
The following are quotes on Kant:

“I am proficient in twelve languages, I will not learn a thirteenth.”

“With the blade of his criticism, his Critique of Pure Reason, Kant, the executioner, beheaded belief in god. God, therefore, became now a fiction.”

“The first attempt to explain the constitution and the mechanical origin of the world in a simple manner by ‘Newtonian laws’ — that is, by mathematical and physical laws—was made by Immanuel Kant in the famous work of his youth (1755), General History of the Earth and Theory of the Heavens. Unfortunately, this distinguished and daring work remained almost unknown for ninety years; it was only disinterred in 1845 by Alexander Humboldt in the first volume of his Cosmos.”

“Goethe stands far above any of Kant's successors in wisdom and an almost instinctive recognition of the truth. In judgment he surpassed his scientific contemporaries like Humboldt almost as much as in philosophical intuition he surpassed Schelling.”

“Immanuel Kant and Isaac Newton are both considered to comprise the smartest people to have ever lived. Based on some recent IQ conjectures, both of the above supposedly had IQ’s beyond the 250 mark.”

Quotes | By
The following are related quotes by Kant:

“It is certain that man derives all his concepts and representations from the impressions which the universe makes upon him through his body, even the power of comparing and combining these impressions, which may be called the faculty of thought.”

— Immanuel Kant (1755), Universal Natural History and the Theory of the Heavens [15]

“The excellence of thinking natures, their quickness of apprehension, the clarity and vividness of their conceptions, which come to them from the impressions of the external world, their capacity to combine these concepts, and finally, their practical efficiency, in short their entire extent of their perfection, becomes higher and more completed in proportion to their remoteness of their dwelling place from the sun.”

— Immanuel Kant (1755), Universal Natural History and the Theory of the Heavens [15]

“The higher beings of these other worldly spheres must ‘view a Newton’ as we ‘view a Hottentot’ or an ape.”

“Individual men, and even whole nations, little think, while they are pursuing their own purposes that they are advancing unconsciously under the guidance of a purpose of nature which is unknown to them.”

“Two things fill the mind with ever-increasing wonder and awe, the more often and the more intensely the mind of thought is drawn to them: the starry heavens above me and the moral law within me.

“That crude matter should have originally formed itself according to mechanical laws, that life should have sprung from the nature of what is lifeless, that matter should have been able to dispose itself into the form of a self-maintaining purposiveness — this [Blumenbach] rightly declares to be contradictory to reason.”

“It is absurd to hope that another Newton will arise in the future who shall make comprehensible by us the production of a blade of grass according to natural laws which no design has ordered.”

“There is only a single categorical imperative and it is this: act only on that maxim through which you can at the same time will that it should become a universal law.

“Hume awoke me from my dogmatic slumber.”

“That crude matter should have originally formed itself according to mechanical laws, that life should have sprung from the nature of what is lifeless, that matter should have been able to dispose itself into the form of a self-maintaining purposiveness—that [is] contradictory to reason.”