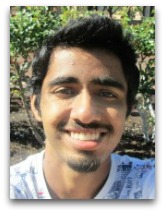 In existographies, Inderjit Singh (1996-) (CR:29) is an American naturalism philosopher, with a claimed IQ of 160 (2014) to 175 (2017), noted for his Mar 2016 “Essay on Mankind”, wherein he espouses on a molecular and energy-based theory of human existence, according to which natural laws are conceptualized as governing humankind, and for his Jun 2016 guest-appearance on Human Chemistry 101 wherein he comments on Alfred Rogers newly premiered video on his 1990s "life does not exist" theory, during which time Libb Thims questioned Singh in video on his "Humankind" essay ideas. [7]
Overview
In 2014, Singh joined Hmolpedia, under the moniker NikolaTesla (Ѻ), themed after Nikola Tesla (name) + William Sidis (avatar), after being drawn to the site via the genius rankings pages. Thereafter, he became an active, quick-witted forum member, often focused on listing his top 50 favorite geniuses or attempting to calculate what he calls a “real IQ” (Ѻ) estimate for many thinkers.

In 2016, Singh stated his opinion that his philosophical mindset has grown, since 2014, into the following composition: [5]

“The unnatural existence developed as the energy of mankind became more erratic. As more people were brought into the world, they began to exist in a manner opposed to the intent of all-powerful nature.”

“To determine the historical significance of the unnatural, the natural human and its traits must first be explicated. Then, the reader can understand how divergence from the path of nature may lead to pain, and an inferior existence.”

“For Humanity to make peaceful progress, widespread misery must be overcome. Most modern misery is the product of the unnatural existence. Thus, the natural must be infused into the unnatural. This shall nullify the difficulties of the unnatural, and ensure that its beneficial aspects are victorious.”

“My method for ascertaining the IQs of Geniuses requires nothing more than a basic calculator (and an IQ of at least 90). Let us begin the heuristic analysis forthwith. Three categories did I devise for the purpose of IQ Analysis. These categories are Intellectual Achievement, Knowledge, and Mental Capacity. So expertly did I design the IQ methodology that one needs merely to assign points to the subcategories in each of the aforementioned categories. In the end, add these together to create an accurate portrayal of the IQs of geniuses. Libb Thims' genius rankings could be used as a reference, by which the accuracy of my IQ scale could be judged.

The knowledge category contains 80 possible points, the Mental Capacity category 90, and the Intellectual Achievement category 60, totaling a threshold IQ of 230, which I believe to be the absolute limit for any natural human being that has not been ameliorated. As Einstein somewhere says: “We are in the position of a little child entering a huge library, whose walls are covered to the ceiling with books in many different languages ... The child notes a definite plan in the arrangement of the books, a mysterious order, which it does not comprehend but only dimly suspects. That is the attitude of the human mind, even the greatest and most cultured, toward [nature].”

The following are a list of some calculated IQs from among his so-called "100 members of the greatest clerisy known to man": [4]

IQ | Estimate
In 2014, Singh, aged 18, guesstimated, via the self-estimation method, such as done by Bertrand Russell, his own IQ at 165, as shown in above "real IQ" table, as a forum post. [4] On 29 Sep 2016, Singh, while attempting to change the stated IQ of his Hmolpedia article, stated, via edit note (Ѻ) comment, the following:

“I suppose my IQ is at 170 now, though the climb to 185 or 195 will be significantly slower than the explosive progress of the past few years.”

Thims, however, revered the edit back to his its previous state, per reason that the ranking of IQs of existive people (see: genius IQs existive) is a subject matter of a different sort than as compare to ranking historical figures (see: top 500 geniuses).

Quotes | On
The following are quotes on Singh:

“In my experience, Mr. Singh, people who noisily proclaim the enormity of their intellectual gifts are in actuality insecure about their intelligence. Secure people do not feel the need to continually beat the drum about their cognitive grandeur. Rather than impressing, it has the opposite effect. Regardless of what motivates such boorishness, it is extremely tiresome.”

Quotes | By
The following are notable quotes:

“Nature, as in the judicial systems of mankind, punishes those who break its laws. It attacks these criminals, bestowing fear, foolishness, and aggression upon them. It crushes the unnatural creatures beneath its might.”

“People in cool climates are generally more educated than the people of the tropics.”

“As humans proliferate, an imperfect system of morality is instituted to control them. This system promises existence after death. It offers an eternal paradise, and threatens eternal damnation. It is based on the mythology of ancient Egypt. This is organized religion.”

“Science stands as the antithesis to religion. The teachers of science attempt to nullify the insidious ideas of the Abrahamic and Brahmaic religions. This is shown in history by the renaissance and the age of enlightenment.”

“To separate a pair of lovers who have an elective affinity for each other is to defy the decree of Nature. In such an illegal act of cruelty, pain explodes forth from between the lovers. When lovers are forced apart, all who are nearby are enveloped in a sphere of distress and discomfort. This wave of agony is similar to the destruction caused when the atom is split.”

Notes
N1. Quote: "If [Thims] is willing to give me the necessary information, I shall use my IQ methodology to calculate his IQ. Otherwise, I will leave it at these vague estimates...I do not see Mr. Thims' IQ being below 190, however." [4]