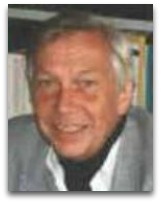 Social | Piston and cylinder
The following image: “Man in piston” cartoon drawn by Mark Warmbrunn (1994); re-annotated by Libb Thims (2013) to illustrate the conception of ‘social boundaries’, e.g. Great Wall of China, originally published in Ingo Muller’s 1994 Grundzüge der Thermodynamik : mit historischen Anmerkungen (Essentials of Thermodynamics: with Historical Notes); also shown on cover of Muller’s 2009 Fundamentals of Thermodynamics and Applications; Warmbrunn being a then 14-year old “genius with a pencil and paper”, was a friend of Muller’s son, an art school applicant. 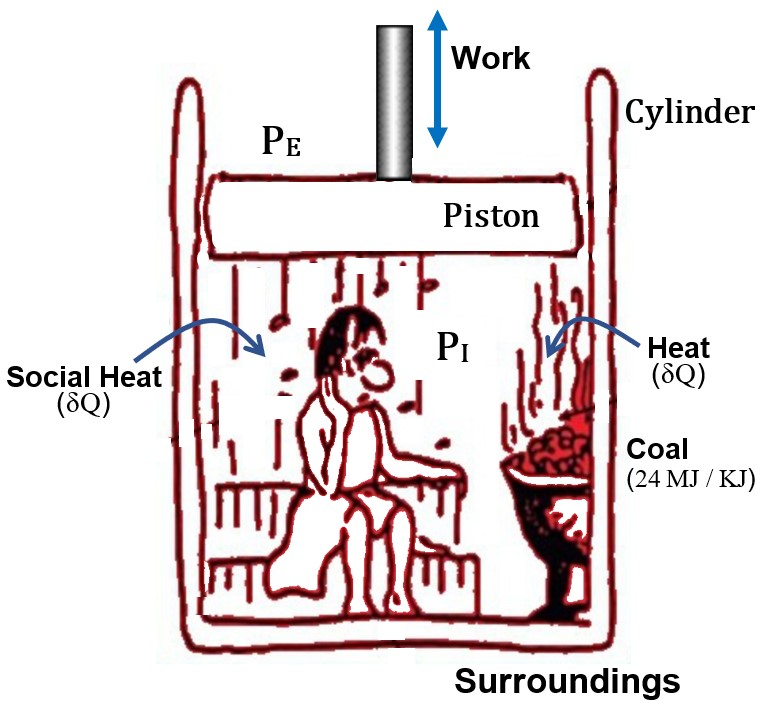 Versions of the image have appeared (Ѻ)(Ѻ)(Ѻ); the one shown above is from Thims’ drafting 2020 Human Chemical Human Thermodynamics (§: Da Vinci engine).

“We firmly believe that thermodynamic ideas, in particular those of Clausius, may find an application outside of thermodynamics, even outside of physics, namely in the fields of economy and sociology.”

In 2007, Müller published A History of Thermodynamics - the Doctrine of Energy and Entropy, a long over-due and greatly-needed book in the field of thermodynamics. In his 2010 article on entropy, energy, and free energy, Muller continues with his hawks versus doves thermodynamics population model, noting that randomization and, on the other hand, a deterministic trend toward preferred states may be observed in other fields of knowledge as well, fields that are remote from thermodynamics, e.g. genetics, sociology, economics, etc., and states that in this work he "proposes extrapolations of thermodynamics to such remote areas. This is a daring undertaking prone to attract criticism." [6]

In his 2005 book Entropy and Energy: A Universal Competition, Müller devotes an entire chapter to the subject of socio-thermodynamics. In this chapter, Müller goes through an example of a metaphorical system of hawks and doves competing for the same limited resource. He compares the segregation and mixing of the two populations to that of physico-chemical systems separations defined by phase diagrams. Through his analogies, he correctly correlates pressure-volume boundary work to that of the ‘part of the habitat lost’ and states that:

“Such analogies emphasize the point of view that physical or sociological systems of many individual elements have common properties, whether the elements are atoms and molecules or birds and (maybe) men.”

One funny point, about the modeling of human social life through the difficult science of thermodynamics, as Müller states in his 2007 book A History of Thermodynamics: the Doctrine of Energy and Entropy, is that:


“It is interesting to note that socio-thermodynamics is only accessible to chemical engineers and metallurgists. These are the only people who know phase diagrams and their usefulness. It cannot be expected, in our society, that sociologists will appreciate the potential of these ideas.”

Here we concur, in that socio-thermodynamics is obvious to the chemical engineer or other mathematically-trained scientists, such as physicists, but the explanation of this obviousness to others is not so easy.

Education
Muller began teaching thermodynamics in circa 1965 and has since taught thermodynamics in four countries (USA, Mexico, Italy, and Germany). His first thermodynamics textbook, among ten total books written in thermodynamics, was published in 1985. [4] His interests have been in all aspects of thermodynamics from the construction and operation of heat engines and refrigerators to the modelling of the thermo-mechanical behavior of shape memory allows, the swelling of poly-electrolytes, and the light scattering in extremely rarefied gases. He developed extended thermodynamics, which is essentially a thermodynamic theory of irreversible processes in rarefied gases; a theory characterized by attractive mathematical properties such as symmetric hyperbolic field equations. [2] In 2005, Müller became an Emeritus Professor of the Technical University Berlin.

Quotes | By
The following are quotes by Muller:

“No doubt, Shannon and Neumann thought that this was a funny joke, but it is not! It merely exposes Shannon and Neumann as intellectual snobs. Indeed, it may sound philistine, but a scientist must be clear, as clear as he can be, and avoid wanton obfuscation at all cost.”