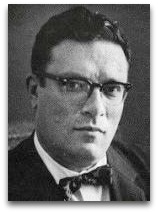 In existographies, Isaac Asimov (1920-1992) (IQ:170|#335) [RGM:130|1,260+] (FA:109), was a Russian-born American biochemist turned science fiction writer noted, in literature thermodynamics, for his 1942 to 1993 Foundation Series, wherein he outlines a theory he calls psychohistory, through the guise of a character Hari Seldon, a type of physical science based conceptualization of history, and for his 1956 science fiction short story The Last Question, on the issue of the fate of humanity in the context of the heat death of the universe. [1] In 2008, Asimov was listed as the 15th most translated author of all time. [6]

Social prediction | Foundation Series
In 1942 to 1993, Asimov published his seven volume Foundation Series, a science fiction story about a character Hari Seldon, a physical science minded mathematician, who devotes his time to the development of what he calls “psychohistory” (see: two cultures namesakes), a “science of human behavior reduced to mathematical equations”, as Asimov describes it; which, as some have pointed out (Ѻ), seems to be similar, thematically, to Henry Adams' 1908 physico-chemical social dynamics theory of history. [8] The series is chucked full of a number physical materialism stylized quotes and theories:

“The laws of history are absolute as the laws of physics, and if the probabilities of error are greater, it is only because history does not deal with as many humans as physics does atoms, so that individual variations count for more.”

“Hari Seldon devised psychohistory by modeling it upon the kinetic theory of gases. Each atom or molecule in a gas moves randomly so that we can’t know the position or velocity of any one of them. Nevertheless, using statistics, we can work out the rules governing their overall behavior with great precision. In the same way, Seldon intended to work out the overall behavior of human societies even though the solutions would not apply to the behavior of individual human beings.”

“Consider the manner in which scientists have dealt with subatomic particles. There are enormous numbers of these, each moving or vibrating in random and unpredictable manner, but this chaos turns out to have an underlying order, so that we can work out a quantum mechanics that answers all the questions we know how to ask. In studying society, we put human beings in the place of subatomic particles, but now there is the added factor of the human mind. To take into account the various attitudes and impulses of mind adds so much complexity that there lacks time to take care of it all.”

“Could not mind, as well as mindless motion, have an underlying order.”

Siegfried
American science writer Tom Siegfried, in his A Beautiful Math (2006), devotes a significant amount of effort to stitching out a theoretical elaboration of Asimov’s ideas via a combination of John Nash based game theory and statistical mechanics. Siegfried explains Asimov's social prediction mindset as follows:

“Trained as a chemist, Asimov knew well that the behavior of gases under different conditions could be calculated with precision, even though nobody could possibly know what any one of that gas’ atoms or molecules was doing. And so he reasoned that a sufficiently advanced science could do the same with people.”

As Siegfried summarizes, in respect to the above Foundation quotes of Asimov: [11]

“Put enough people together and the laws of human interaction will produce predictable patterns—just as the interactions and motion of molecules determine the temperature and pressure of a gas. Describing people as though they were molecules is just what many physicists are doing today—in effect, they’re taking the temperature of society.”

“One of the best ways to take that temperature, it turns out, is to view society in terms of networks. In much the same way that ‘temperature’ captures an essential property of a jumble of gas molecules, network math quantifies how ‘connected’ the members of a social group are.”

Siegfried here, to note, is under the (possibly overzealous) view that Nash's game theory (and his Nash equilibrium model) has the potential to become the "great unifier" between the social scientists and the physical scientists.

The Last Question
In 1956, Asimov, in his The Last Question, through the course of six scenes in the story, taking place in the year 2061, different characters ask a new computer called Multivac how the threat to human existence posed by the heat death of the universe can be averted? The last question is: [2]

“How can the net amount of entropy in the universe be massively decreased?”

In each case, Multivac is unable to answer, due to having “insufficient data for a meaningful answer.”

Biographical Encyclopedia
Asimov is often cited as an expert on the second law of thermodynamics, even though he has never written a book on thermodynamics? [3] This is likely due to his softening of the subject in story form or watered-down explanation. The following is his 1970 explanation of the second law: [5]

“Another way of stating the second law is: ‘the universe is getting more disorderly!’ Viewed that way, we can see the second law all about us. We have to work hard to straighten up a room, but left to itself it becomes a mess again very quickly and very easily. Even if we never enter it, it becomes dusty and musty. How difficult to maintain houses, and machinery, and our own bodies in perfect working order; how easy to let them deteriorate. In fact, all we have to do is nothing, and everything collapses, breaks down, wears out, all by itself, and that is what the second law is all about.”

German physicist Ingo Muller, likewise, uses Asimov, specifically his Biographical Encyclopedia of Science and Technology (1964), ubiquitously as his main reference in his 2007 A History of Thermodynamics; citing his name in the text on more pages than any other (aside for Boltzmann and Einstein). [4]

IQ | Mensa | Rankings
In 1961, Asimov, as retrospectively discussed in his I, Asimov: a Memoir (c.1990) (Ѻ)(Ѻ), was asked, by a friend, to join Mensa; firstly, he stated his reservations about this as follows:

Then he discussed his joining experience:

“I took the test, scored high, and became a member of Mensa. It was not on the whole, a happy experience. I met a number of wonderful Mensans, but there were other Mensans who were brain-proud and aggressive about their IQs, who, one got the impression, would like, on being introduced, to be able to say, ’I’m Joe Doakes, and my IQ is 172,’ or, perhaps, have the figure tattooed on their forehead. They were, as I had been in my youth, forcing their intelligence on unwilling victims. In general, too, they felt underappreciated and undersuccessful. As a result, they had soured on the Universe and tended to be disagreeable.

What’s more, they were constantly jousting with each other, testing their intelligence on each other, and that sort of thing becomes wearing after awhile. Furthermore, I became uncomfortably aware that Mensans, however high their paper IQ might be, were likely to be as irrational as anyone else. Many of them believed themselves to be part of a ‘superior’ group that ought to rule the world, and despised non-Mensans as inferiors. Naturally, they tended to be right-wing conservatives, and I generally feel terribly out of sympathy with such views.

Worse yet, there were groups among them, I found out eventually, who accepted astrology and many other pseudoscientific beliefs, and who formed ‘SIGs’ (‘special interest groups’) devoted to different varieties of intellectual trash. Where was the credit of being associated with that sort of thing, even tangentially?... I stayed on in Mensa for years, getting more and more tired of it. ... Eventually, after both Marvin and Margot [two of the New York Mensans he acknowledged as "delightful and intelligent"] had died, I did resign.”

Asimov was a bit of an open speaker about his perceived level of intelligence:

“Those people who think they know everything are a great annoyance to those of us who do.”

In 1976, Asimov, in the non-fiction work The Planet That Wasn't, claimed to have an IQ of 300. He got it that high by taking one of the instant IQ-tests found in a book, but taking 15 minutes instead of the 30 that was recommended. The score calculation provided an IQ of 150, and Isaac doubled the score to account for half the time. He then explained why he doesn't have much faith in these IQ tests (the most important claim being that they penalize for slowness but give no bonus for speed). (Ѻ)

“The Bible, properly read, is the most potent force for atheism ever conceived.”