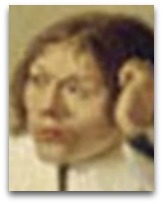 In existographies, Isaac Beeckman (1588-1637) (IQ:185|#62) (GPE:43) (GPhE:75) (CR:7) was a Dutch physicist, philosopher, astronomer, physician, meteorologist and natural philosopher, characterized as “gifted but overly modest” (Truesdell, 1960), noted for questioning the logic of abhorrence of the vacuum model (see: nature abhors a vacuum) as the cause of "movement in nature" (1614), explained the action of a suction pump by an appeal to the pressure of the air (c.1615), for originating the matter and motion model (1818) of mechanistic philosophy, for introducing the first concept of "molecule" (1820), and for mentoring Rene Descartes and Pierre Gassendi. [8]

Overview
Beeckman developed a view of the world in which everything, from the motion of the heavens to musical harmonies, supposedly, is explained by reducing it to matter in motion (see: matter and motion). [1]

Vacuum
The following are quotes by Beckmann on the topic of the vacuum and or the nature abhors a vacuum premise:

“What is the reason that bodies are moved in any direction, so that a vacuum may not exist in nature? I answer: it happens that air, after the manner of water, presses, upon things and compresses them according to the depth of the super-incumbent air. But some things remain undisturbed, and are not perpetually moved about, because they are everywhere equally compressed by the air above them, just as our divers are pressed by the water. But things rush towards an empty space with great force, on account of the immense depth of the super-incumbent air, and in this way the weight of the air arises. But air must not be said to be heavy, because we walk in it without any pain, as indeed the fishes move in water, suffering no compression.”

“You bring forth good arguments about the vacuum. Indeed, if a vacuum is said to exist in the pores of the air, water, lead, etc., or if all the space between the outermost bound of your atmosphere and the stars is said to be empty, nothing follows that is absurd. Really, although the philosophers babble about the necessity of all things being united, of the propagation of accidents and visible appearances in the air, of the impossibility of motion in a vacuum, etc., these seem to me nothing but old wives’ tales; for I admit nothing in philosophy, unless it is represented to the imagination as being perceptible to the senses.”

Education
In 1610, Beeckman obtained the equivalent of a BA in linguistics and philosophy at Leiden University. [5]

In 1618, Beekman, obtained his MD at Caen University, wherein, as corollaries to his dissertation, which was on the subject of "intermittent fever", laid down the principles of a new and revolutionary way to account for natural phenomena, the mechanical philosophy. (Ѻ)

Beeckman's later primary interests were: physics, mechanics, and natural philosophy, and his subordinate interests were: astronomy, engineering, and meteorology. [5]
Journal Notes
In 1604 to 1634, Beeckman kept a series personal notes in a journal, rediscovered in 1905, wherein, in what amounts to four-volumes of published ideas, he stated that he knew that air and water were compressible (volume one, pgs. 42, 47, 175), correctly explained the action of a suction pump by an appeal to the pressure of the air (volume one, pgs. 46-47, 79, 200), and dismissed the premise that “nature abhors a vacuum” as being the cause of motion of things (volume one, pg. 36). [7]

Influences
Beeckman was a student, supposedly, of Snellius and Simon Stevin.
-
Descartes
In Nov 1618, Beeckman, aged 30, in the city of Breda, met Rene Descartes, aged 22, which followed in a series of stimulating conversations, which put Descartes into his matter and motion philosophical line of thinking. (Ѻ)

In a noted anecdote, as the story goes, Rene Descartes and Isaac Beeckman, one day, were in the town square of the Dutch city of Breda, where Descartes was stationed as part of the French army and where Beeckman was head of a local college, during which time, the two were looking a list of philosophical questions posted on the wall, as illustrated adjacent, a custom in this town, during which time Descartes asked Beeckman to translate one of the problems into Latin or French, after which, to Beeckman’s surprise, Descartes immediately solved it. [6]

Beeckman, in short, is said to have convinced Descartes to take up the study of nature mathematically. [3]

Gassendi
Beeckman also met and influenced Pierre Gassendi, who he supposedly convinced to turn his attention to the natural philosophy side of Epicurus. [3]

Quotes | On
The following are quotes on Beeckman:

“I was falling asleep, and you woke me up; you alone have shaken my laziness and you have reminded me of my erudition which had almost lost.”

“Beeckman is the best philosopher that I have yet met.”

“The first ‘molecular’ theory of phenomenal matter, be it avant la lettre (before the specified word or concept existed), was conceived in the period 1612–1620 by the Dutch natural philosopher Isaac Beeckman. According to Beeckman, all matter is an aggregate of so-called “physical homogenea” (“homogenea physica”) of varying stability. So, the homogenea of substances such as metals and medicines are quite stable, while those of light and sound, for instance, are far less so. Beeckman's homogenea are supposed to be composed of four kinds of atoms of one and the same prime matter, these atoms being united in specific numbers into a specific structure. The Epicurus batavus compared his homogenea with biological individuals. Like biological individuals of the same species, similar homogenea are not perfectly identical. They are taken as substantial individuals and manifest as such a variability comparable to that of their biological counterparts. Moreover, as substantial individuals they are the necessary and sufficient condition for the existence of a specific substance. Beeckman's concept of “molecule” can rightly be considered as one of the major achievements of the so-called Scientific Revolution of the 17th century.”

“Contrary to Galileo, however, Torricelli [1644] reasoned that the column of mercury was held up by the ‘pressure’ of the surrounding atmospheric air. This explanation also had been proposed, independently, by Isaac Beeckman [c.1620].”

“Isaac Beeckman was a Dutch pioneer of early modern atomist and mechanist speculation. By profession a maker of candles and water supply systems, and later head of various Latin schools, Beeckman devoted a lifetime to studies in natural philosophy, and has received considerable scholarly attention since the rediscovery [1905] of his Journal which he kept between 1604 and 1634. Beeckman’s topics in these studies were the atomist assumption that natural phenomena result from nothing but the motion in empty space of small and hard bits of matter and the mechanist assumption that causal impact in the natural world takes place by way of direct contact of matter with matter.”

Quotes | By
The following are quotes by Beeckman:

“It cannot be denied that the lower part of water or air is more strongly compressed than the upper part, since it is compressed by its own weight, as would happen to an immense sponge, its lower part lying on the earth is packed more tightly than the upper part. But this cannot be of great importance in the case of air which by its nature cannot easily be over-compressed and which is not very weighty. Nevertheless, it is necessary to believe that the lower part is as compressed as it could be, by the upper air, and consequently there exists a greater compression at its base.”

“Air is heavy. It presses us from all sides in a uniform way. Things precipitate into an empty space with great force because of the tremendous height of the air above.”