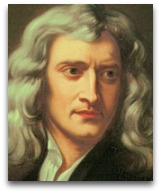 In Jan 1684, Edmond Halley, Christopher Wren, and Robert Hooke were engaged in an animated conversation, either over drinks before a roaring fire (Christianson, 1988), or at a coffee house in London (Ѻ), on the topic of why planets traveled in ellipses, according to which, either Hooke or Halley, or both, depending on story, claimed to have solved the problem, via the theory that the inward force of attraction between planets and the sun must decrease in inverse proportion to the square of the distance between them. Wren, to settle the matter, offered them either a large sum or money or book worth forty shillings to whoever could come up with the mathematical means of proving their theory. Hooke, supposedly, claimed to have solved the problem, “but would conceal the solution for some time so that others trying and failing might know how to value it, when he should make it public.”

In Aug 1684, Wren went to Cambridge to see if Newton had the solution, the event of which, as recounted by French mathematician Abraham de Moivre, to whom Newton related the event in his later years, is as follows:

“In 1684, Halley came to visit Newton at Cambridge, after they had been some time together, Halley asked him what he thought the curve would be that would be described by the planets supposing the force of attraction towards the sun be reciprocal to the square of their distance from it. Newton replied immediately that it would be an ellipsis; Hooke, struck with hoy and amazement, asked him how he knew it, to which Newton said that he had calculated it, whereupon Halley asked him for his calculation. Without any further delay, Newton looked among his papers, but could not find it, but he promised him to renew it, and send it.”

Newton then spent the following three months laboring over a nine-page document titled “On the Motion of Revolving Bodies”, which he finished in Nov and sent to Halley in London. Newton then went into the Gibbsian flow state, of standing focused work, and over the course of the next 18-months produced his 550-page treatise Principia. [10]

The subject of Newton and religion, supposedly, is a large topic. To put things into perspective, in 1619, when Johannes Kepler (1571-1630), derived his three laws of planetary motion, on the nature of elliptical orbits, based on astronomical observations made by Tycho Brahe (1546-1601), data which provided one of the key foundations for Newton’s theory of universal gravitation (1687), scientists, nearly unanimously, not only believed in God or gods, but also, Kepler being one example, believed that the planets were pushed around by "angels" beating their wings.

“God who gave animals self-motion beyond our understanding is without doubt able to implant other principles of motion in bodies which we may understand as little. Some would readily grant this may be a spiritual one; yet a mechanical one might be shown.”

Newton, to give one example of religious theory objection, had certain issues with the Julian calender dating system and would objectionably not label years as AD, but instead used AC (Anno Christum), signifying is objection to the argument of the existence of the trinity, namely his view that a person named Jesus may have existed, may have been the son of God, and may have been christened or arisen, but definitely was not the ‘Lord’ or God. [5]

“Did Christ send his apostles to preach metaphysics to the unlearned people, and to their wives and children?”

Collected works
Newton, at the time of his death (reaction end), had amassed all the world's knowledge into a large collected works set, estimates of which, still not yet finalized (Ѻ), indicate 40-volumes±, including: 25-volume set of correspondence, 8-volume plus set of mathematical papers, 3-volume plus set of optics, one volume plus on Philosophical Questions, and untold volumes on alchemical pursuits and religious ventures; the apex of which being his Principia (1686) and Optics (1718), the latter of which, via Query 31, launched the chemical revolution.

“Any self-respecting editor—aiming to undertake a publication of Newton’s collected works—would have to be absorbed in Newton's 'defunct' world for many years, and 'probably he would never quite find his way out of it'.”

Dating
There seems to be some type of blurry confusion concerning the dates Newton's reactions existence, according to whether one uses the Julian calender system (older calender) or the Gregorian calendar system (modern calender), a transition that occurred, depending on country, during the years 1582 to 1752: [6]

The following quote by Goethe would seem to put preponderant weight on the year "1642" as being the year the modern thinker should consider as Newton's birth:

Galileo birth | Newton death
The modern issue, in respect to Newton's birth/death dating seems to have something to do with people attempting to correlated or popularizing either their own or certain celebrity scientist birth and death dates in respect to Newton's birth and or death dates and Galileo's death. Science misattribution debunker Gerard Michon comments and diagrams the issues as follows: (Ѻ)

The following are a few examples of date misattribution:

“The most famous contemporary of Kepler was Galileo Galilei (1564-1642). William Shakespeare was born the same year as Galileo and Isaac Newton was born the year he died.”

“Galileo died on 8 Jan 1642, exactly three hundred years before the day I was born. Isaac Newton was born on Christmas Day of that year later becoming Lucasian Professor of mathematics at Cambridge, the chair I now hold.”

Humans
The following are noted positions of Newton in respect to human movements and behaviors:

“I can calculate the movements of stars, but not the madness of men.”

Query 31
Newton, who conceived of molecules as being structures of atoms attached together by a chemical force of affinity. He outlined his atomic chemical force affinity bonding theory in the ‘Queries’ section to his Opticks. To cite one example of Newton’s description of a gradient of affinity reactions, he states: [1]

“Is it not for want of an attractive virtue between the parts of water and oil, of quick-silver (Hg) and antimony (Sb), of lead (Pb) and iron (Fe), that these substances do not mix; and by a weak attraction, that quick-silver and copper (Cu) mix difficultly; and from a strong one, that quicksilver and tin (Sn), antimony and iron, water and salts, mix readily?”

In 1718, during a translation into French of Newton’s Opticks, French physician and chemist Étienne Geoffroy used Newton’s descriptions of affinity reactions to construct the world’s first affinity table, containing twenty-four reacting species, detailing specifically what affinity reactions would occur between various combinations of reactants. This table seeded the chemical revolution: [2]

Heat
Newton, in later editions of his Optics, stated that the cause of heat is the rapid motion of the parts of bodies, and also proposed a kinetic theory of evaporation. [11]

He also also suggested that the reason why black bodies (see: black body) heat up more rapidly than those of other colors is that they absorb the incident light, which is thereby “stifled and lost” inside them. [11]

Newton, in some unpublished writing, also explained thermal expansion of air by postulating that the constitute atoms vibrate with amplitudes that increase with temperature. [12]

Quotes | On
The following are quotes on Newton:

“It is likely that animals, being less perfect than man, could have been fashioned first? As they imitated each other, so man probably imitated them; for their whole kingdom is in truth only made up of different, more or less skillful apes, at the head of which Pope placed Newton.”

“Newton, by the age of 23, invented calculus, explained that light was made up of colored light, and discovered the law of gravity, although he waited to publish. His Principia (1687) drew on Descartes’ law of inertia, Galileo’ ideas on acceleration, and Kepler’s laws, and brought it all to a mathematically expressed synthesis that made the world strangely intelligible. In the early drafts for the second edition, Newton included ninety lines from Lucretius’ On the Nature of Things in association with his concept of inertia.”

“Immanuel Kant and Isaac Newton are both considered to comprise the smartest people to have ever lived. Based on some recent IQ conjectures, both of the above supposedly had IQ’s beyond the 250 mark.”