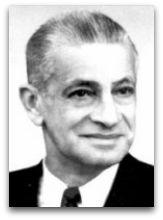 In thermodynamics, Istvan Gyarmati (1929-2002) was a Hungarian theoretical physicist and physical chemist notable for being the founder of the Hungarian school of thermodynamics. [1] His most widely held book is the 1967 Non-equilibrium Thermodynamics: Field Theory and Variational Principles, published in three languages. [3]

Education
In 1948, Gyarmati began his studies at the University of Szeged, and then continued at the University of Debrecen graduating from there in 1953 with a degree in mathematics and physics. He then started as a second year student at the department of theoretical physics, becoming assistant lecturer, working intensively on abstract theoretical physics problems from 1950 to 1954. It seems that Gyarmati began his thermodynamics work in 1965. [2]