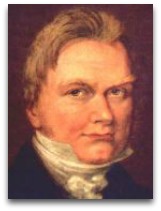 Overview
In 1818, Berzelius had determined the atomic weights for 45 of the 49 accepted elements.

The word “catalysis” was coined by Berzelius in 1835 who noted that certain chemicals or material speed up a chemical reaction:

“A catalyst is a substance which alters the velocity of a chemical reaction without appearing in the final products.”

Berzelius was also very interested in the relation between heat, affinity, and temperature in the context of chemical reactions. In his 1814 book Theory of Chemical Proportions, a forerunner to stoichiometry, Berzelius stated: [5]

“Experience shows that heat is disengaged in every chemical combination when carried out in circumstances favorable to its perception, and that by the saturation of powerful affinities, the temperature often rises to the point of incandescence, whilst the satisfaction of the feeblest affinities is capable of only raising the temperature through a few degrees.”

In 1807, Berzelius had become a chemistry professor at the Karolinska Institute, one of the largest medical schools in the world. Over the next several years, he wrote a chemistry textbook for medical students and in 1831 after studying the results of various electrolysisexperiments he outlined an electrochemical theory in which a salt has an atomic structure composed of an acid, with a negative charge, and a base, with a positive charge. [4] The acid and the base were further deduced to that of an acid anhydride, comprised of a positively charged radical attached to a negative oxygen, and a basic oxide, comprised of positive metal attached to a negative oxygen.

Molecules, according to this view, are three-dimensional structures comprised of positive and negative charges attached, in some way, to their structure. Berzelius’charge distribution model was based on the observation that salts in solution are decomposed by the electric current of a Voltaic pileinto bases, which attract towards the battery’s negative pole and therefore seem to carry a positive charge, and acids, which are drawn to the battery’s positive pole and therefore seem to carry a negative charge. [4]

Berzelius’ theories on charge distribution would later be used as a basis for the work of Irish physicist George Stoney, the person who coined the term electron in 1891.

In the 1830s, on the advice of Berzelius, Dutch chemist Gerardus Mulder carried out elemental analysis of common animal and plant proteins. To everyone's surprise, all proteins had nearly the same empirical formula, roughly C400H620N100O120PnSm, where subscripts n and m are constants which vary per protein. In 1837, Mulder published his findings in which he hypothesized that there was one basic substance (‘Grundstoff'’) of proteins, and that it was synthesized by plants and absorbed from them by animals in digestion. Berzelius was an early proponent of this theory and proposed the name protein for this substance in a letter dated July 10, 1838: ‘the name protein that I propose for the organic oxide of fibrin and albumin, I wanted to derive from Greek word πρωτειος, because it appears to be the primitive or principal substance of animal nutrition.’

In 1834, Jacob Berzelius obtained samples of the Alais meteorite (a meteorite that had fell near the town of Alais in France in 1802) and subjected them to chemical analysis, and found the presence of carbon compounds, which to Berzelius meant life. [16] This seems to have been the start of the so-called "comet origin of life theory".

Quotes | By
The following are noted quotes

“Chemical signs ought to be letters, for the greater facility of writing. I shall take therefore for the chemical sign, the initial letter of the Latin name of each elementary substance: but as several have the same initial letter, by writing the first two letters of the word.”

“I can prepare urea without the aid of a kidney of man or beast.”