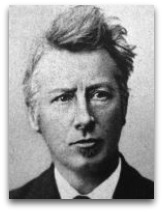 In existographies, Jacobus van’t Hoff (1852-1911) (CR:75) was a Dutch physical chemist noted, in chemical thermodynamics, for his work in 1884 Studies in Chemical Dynamics, in which he described a new method for determining the order of a reaction using graphics, and applied the laws of thermodynamics to chemical equilibria, such as captured in his circa 1886 van't Hoff equilibrium box. [1] In this work, Van’t Hoff gave one of the first thermodynamical treatments of affinity (following Helmholtz, 1882), defining affinity as the maximum external work done by the chemical reaction at constant temperature and volume. [5]

Education
In c.1873, Van’t Hoff studied at the Polytechnic and Delft and the University of Leiden. He then studied under chemist Friedrich Kekule at the University of Bonn, Charles Wurtz at the Ecole de Medecine, Paris, and in 1874 he obtained his PhD under G.J. Mulder at the University of Utrecht, supposedly written on a relatively trivial thesis on organic chemistry. [8]

In 1874, Van't Hoff jumped to novel fame, so to speak, when he built on the work on isomers of German chemist Johannes Wiclicenus, and showed that the four valencies of the carbon atom were probably directed in space toward the four corners of a regular tetrahedron, a model which explained how optical activity could be associated with an asymmetric carbon atom, a theory which laid the foundations of stereochemistry. [7]

In 1877, while a lecturer in physics at the veterinary school in Utrecht, van’t Hoff published “Views on Organic Chemistry” (Ansichten über die organischen Chemie), which contains the beginnings of his studies in chemical thermodynamics. [7]

In 1878, he became a professor of chemistry, mineralogy, and geology at the University of Amsterdam, where he began his researches in thermodynamics and chemical kinetics in order to explain chemical equilibrium and chemical affinity. [8]

In 1884, a result of his prolonged decade-long effort to explain chemical equilibrium and chemical affinity, he published his famous 1884 Studies in Chemical Dynamics (Études de Dynamique Chimique), one of the early founding publications of chemical thermodynamics, wherein he outlined the the principles of chemical kinetics, described a new method of determining the order of a reaction, and applied thermodynamics to chemical equilibrium.

In 1886, he published results of his study that dilute solutions show an analogy with gases, in the sense that the both obey an equation of the type:

In 1887, Van't Hoff and German physical chemist Wilhelm Ostwald started the Journal of Physical Chemistry (Zeitschrift fur Physikalische Chemie), which together with the work of Svante Arrhenius, is a year said to mark the start of "physical chemistry" as a recognizable discipline. [8]

In 1896, he became a professor at the Prussian Academy of Sciences in Berlin.

Schools
Van't Hoff is said to be one of the three "chiefs" of the Dutch school of thermodynamics, along with Dutch physical chemist Johannes van der Waals and Dutch chemist Bakhuis Roozeboom at the University of Amsterdam, as well as to have his own school the so-called "Van't Hoff school". [6]

Chemical affinity
Of importance in this paper, van’t Hoff showed the chemists how thermodynamics could be applied to their science, especially with reference to ideas on affinity. [2] In his work, he drew the distinction between chemical kinetics and chemical thermodynamics and showed that the maximum external work obtained when a chemical reaction was carried out reversibly and isothermally could serve as a measure of chemical affinity. [2] This was similar in theory to the 1882 work of German physician and physicist Hermann von Helmholtz who called such maximum work “free energy”. [3] Supposedly, however, it was van’t Hoff who introduced the notion of chemical affinity as the driving force for chemical reactions. [4]

In the early 20th century, American Gilbert Lewis proposed that the term free energy be restricted to mean “work available for use”. [2]