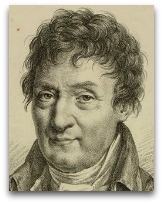 Ballooning
On 4 Jun 1783, Joseph Montgolfier, and his brother, demonstrated an unmanned hot air balloon before the provincial Estates of Vivarais. News of this flight quickly reached Paris, where a commission from the Royal Academy of Sciences followed. (Ѻ) Charles, being one of the leading experimental physicists in France, presumably thereafter became aware of these Montgolfier balloon experiments.

Charles, as a chemist, after studying the work of contemporaries Henry Cavendish, who had isolated hydrogen previously, Joseph Black, and Tiberius Cavallo, became convinced that hydrogen would be the best gas to make a balloon that would carry people, per reason that it would avoid the cooling problem seen in the Montgolfier tests. [2]

On 27 Aug 1783, Charles, with the help of engineering brothers Jean Robert and Louis Robert (Ѻ), launched an unmanned balloon, made of sheets of silk coated with dissolved rubber in a solution of turpentine, 35 cubic meters in volume, filled with hydrogen made by pouring sulphuric acid into scrap iron, which carried 9 kg of weight, and flew for 21 kilometers.

Charles law
In 1787, Charles conducted an experiment where he filled five balloons to the same volume with different gases, and then raised the temperature of the balloons to 80ºC and noticed that they all increased in volume by the same amount; he thus found the following relation: [3]

In 1802, Joseph Gay-Lussac, in a paper on the precise relationship between the volume and temperature of a gas, wherein, supposedly, the above relation was first expressed, mathematically, referenced Charles’ unpublished experiment, and used the term “Charles law” in reference to the finding that a volume of any ideal gas, at constant particle count and pressure, is proportional to the temperature of the gas.