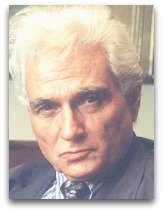 Influences
Derrida has been influenced by: Jean Rousseau.

Quotes | On
The following are quotes on Derrida:

“When the system does not have sufficient free energy F to drive its entropy production and thus organisational changes, there are two options to obtain further free energy. One option is that it can be imported from an external source like animals eating food or plants absorbing sunlight. The other option is that it can be liberated from within by giving up some of its organisation through a process which I call the "creative collapse" (the complexity version of Heidegger's and Derrida's "deconstruction"). Taking animals or plants as example, they will then use their own tissues as source of free energy rather than eating food.”