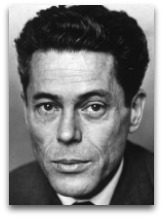 In existographies, Jacques Monod (1910-1976) (CR:13) was French protein chemist, chnopsologist, and science philosopher noted, in animate thermodynamics, for his 1970 book Chance and Necessity—a title drawing its name from Greek atomic theorist Democritus’ idiom “everything existing in the universe is the fruit of chance and necessity”—a book that seemingly attempts to outline a natural philosophy of modern biology [chnopsology] crouched on pure chemistry and physics, using recourse to Maxwell’s demon, cybernetics, among other topics, to prove in the end, supposedly, that the process of evolution and of life are the result of natural processes resulting from “pure chance” (see: random chance). [1] A noted quote from the book is: [2]

The book has been described by American animate chemist Jeffrey Wicken as a “manifesto of materialist biology in the most reductivist sense.” [3]

Autonomy
Monod seems to think that his 1963 sparsely-cited article “Allosteric Proteins and Molecular Control Systems” established the view that proteins and enzymes have a type of cybernetic allosteric interaction system that “permit a complete freedom in the ‘choice’ of controls” such that: [6]

“The huge network of cybernetic interconnections makes each organism an autonomous functional unit, whose performance appears to transcend, if not to escape, the laws of chemistry. It is in the structure of these molecules that one must see the ultimate source of the autonomy, or more precisely, the self-determination that characterizes living beings in their behavior.”

This of course is nothing but perpetual motion code for the free will argument in people. This biasing perspective is evidenced in the closing line of his book:

“Neither his destiny nor his duty have been written down. The kingdom above or the darkness below: it is for him to choose.”

In short, Monod’s entire effort seems to have spun a “blind random chance” model of genetic mutation, in a convoluted end aim to situate free will within a materialist framework. This view, however, conflicts with the chemical thermodynamics view that reactions are predetermined by free energy measurements.

Origin of life
Monod, on the origin of life, supposedly, was a proponent of the view that life on earth arose by freak chemical accident and was unlikely to be duplicated even in the vast universe. The following circa 1971 statement by Monad is said to exemplify this position:

"Man at last knows he is alone in the unfeeling immensity of the universe, out of which he has emerged only by chance. His destiny is nowhere spelled out, nor is his duty. The kingdom above or the darkness below; it is for him to choose."

Some have summarized this as a "bleak assessment [of human existence] and a springboard to argue for atheism and the absurdity and pointlessness of existence." Monod also, supposedly, stated we are merely chemical extras in a majestic but impersonal cosmic drama—an irrelevant, unintended sideshow

Purpose
Monad employs the term “teleonomic” to permit recognition of purpose in the sphere of animate existence. [4] The following, possibly contradictory quote, is also attributed to Monad: "The first scientific postulate is the objectivity of nature: nature does not have any intention or goal." (check)

Education
Monad learned from French embryologist Louis Rapkine, noted for his 1932 The Energetics of Development, the concept that only chemical and molecular descriptions could provide a complete interpretation of the function of living organisms. [5]

“There are living systems; there is no living ‘matter’. No substance, no single molecule, extracted and isolated from a living being possess, of its own, the aforementioned paradoxical properties. They are present in living systems only; that is to say, nowhere below the level of the cell.”