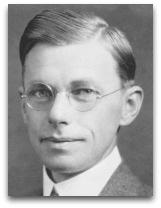 In existographies, James Conant (1893-1978) was an American organic chemist and philosopher, noted for []

Overview
In 1951, Conant gave a series of Bampton lectures at Columbia University, in area of science, sociology, and philosophy, published as Modern Science and Modern Man; the following is an example quote: [1]

“The theorist who is attempting to ‘lower the degree of empiricism’ in the material world is now respected.”

In c.1970s, Conant’s views were read by Mirza Beg, who in his work later work on physico-chemical sociology, stated that he too sought to ‘reduce empiricism’ by a certain degree.

Quotes | On
The following are quotes on Conant:

“Human behavior an physico-chemical laws seem to be inter-related, but time and again it has been questioned whether the enormously complex processes of human behaviour could have a scientific basis at all. The human organism has a limited dimension and there are a number of actions and reactions taking place within as well as on it and to all of these the Heisenberg’s uncertainty principle applies. Thus, it is apparently beyond the range of predictive or reproducible science. This is why researchers, in spite of the limitations, have settled for the limited degree of prediction achieved by science and if we go by Conant the most that could be achieved is a reduction in the degree of empiricism (Ѻ) in social sciences. The following pages are likewise aimed at reducing empiricism by a certain degree.”