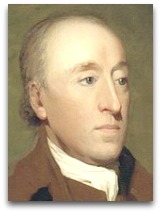 In existographies, James Hutton (1726-1797) (IQ:170|#350) (Murray 4000|#2ES) was a Scottish geologist, noted for 1785 Theory of the Earth, wherein he disabused six day creation myth, replacing it with “laws observable in the composition, dissolution and restoration of land upon the globe”.

Overview
In 1785, Hutton, in his Theory of the Earth: an Investigation of the Laws observable in the Composition, Dissolution, and Restoration of Land upon the Globe, which in the years to follow allowed his “disciples to remove the assumption that six thousand years was the age of this planet”, which, according to Norman Dolloff (1975), was a “relaxation [that] gave Darwin the lever to pry biology loose from religion.” [1]

Quotes | On
The following are quotes on Hutton:

“Black was a friend and supporter of James Hutton the geologist, whose ‘uniformitarian’ doctrine, which lays down that in attempting to account for the nature of the earth’s surface we must assume that no agency acted in the past that we cannot actually observe at work today: frost, rain, wind, avalanche, deposition of silt, earthquakes and volcanoes, coastal and river erosion, etc., which represented an application of positivist principles to the new science of geology.”

Quotes | By
The following are quotes by Hutton:

“The past history of our globe must be explained by what can be seen to be happening now. No powers are to be employed that are not natural to the globe, no action to be admitted except those of which we know the principle.”

“There is no vestige of a beginning, no prospect of an end.”

“Man is made for science; he reasons from effects to causes, and from causes to effects; but he does not always reason without error. In reasoning, therefore, from appearances which are particular, care must be taken how we generalize; we should be cautious not to attribute to nature, laws which may perhaps be only of our own invention.”

References
1. Hutton, James. (1785). “Theory of the Earth: an investigation of the laws observable in the composition, dissolution and restoration of land upon the globe” (Ѻ), Transactions of the Royal Society of Edinburgh. Publisher.
2. Dolloff, Norman H. (1975). Heat Death and the Phoenix: Entropy, Order, and the Future of Man (pg. xiv). Exposition Press.

Further reading
● Hutton, James. (1795). Theory of the Earth: with Proofs and Illustrations: Volume Three. Publisher, 1899.
● Repcheck, Jack. (2010). The Man Who Found Time: James Hutton and the Discovery of the Earth’s Antiquity. Publisher.