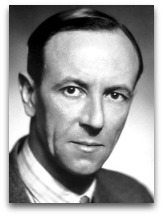 In existographies, James Chadwick (1891-1974) (GPE:85) was English physicist noted for his 1932 discovery of the neutron—though, technically, Ettore Majorana, independently, arrived at the same conclusion, namely the existence of a “heavy neutral particle”, as he termed it, within the same period that year.

Neutron
A new form of penetrating radiation came to light in 1930, when Bothe and others bombarded beryllium with a-particles. Although these emissions were attributed initially to an unusual form of gamma radiation, James Chadwick suspected a different origin.

“If we ascribe the ejection of the proton to a Compton recoil from a quantum of 52 x 106 electron volts, then the nitrogen recoil atom arising by a similar process should have an energy not greater than about 400,000 volts, should produce not more than about 10,000 ions, and have a range in the air at N.T.P. of about 1-3mm. Actually, some of the recoil atoms in nitrogen produce at least 30,000 ions. In collaboration with Dr. Feather, I have observed the recoil atoms in an expansion chamber, and their range, estimated visually, was sometimes as much as 3-mm. at N.T.P.

These results, and others I have obtained in the course of the work, are very difficult to explain on the assumption that the radiation from beryllium is a quantum radiation, if energy and momentum are to be conserved in the collisions. The difficulties disappear, however, if it be assumed that the radiation consists of particles of mass 1 and charge 0, or neutrons. The capture of the a-particle by the Be9 nucleus may be supposed to result in the formation of a C12 nucleus and the emission of the neutron. From the energy relations of this process the velocity of the neutron emitted in the forward direction may well be about 3 x 109 cm per sec. The collisions of this neutron with the atoms through which it passes give rise to the recoil atoms, and the observed energies of the recoil atoms are in fair agreement with this view. Moreover, I have observed that the protons ejected from hydrogen by the radiation emitted in the opposite direction to that of the exciting a-particle appear to have a much smaller range than those ejected by the forward radiation. This again receives a simple explanation on the neutron hypothesis.”