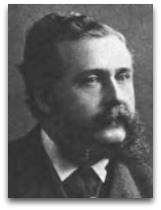 In religio-mythology, James Forlong (1824-1904) was a Scottish, road engineer, major general, and religio-mythology and comparative religions scholar noted for his erudite three-volume posthumously-published 1904 Faiths of Main: an Encyclopedia of Religions, with some rather impressive etymological entries on terms, such as “Ab”, and thinkers, such as Empedocles.

Ab
The following is Forlong's entry on "Ab", the salient root of Anunian theologies, namely the Ab-ra-ham-ic faiths and B-ra-hma-ic faiths, which dominate the belief states of over three-quarters of the modern world: [1]

Ab. This word, in many languages, denotes "father" (as in Akkadian, Turkish, Hebrew, etc.) like the Latin avus. With Akkadians also ab was "moving water " (compare A) like the Turkish ab "wave," and the Aryan ap "water." The Babylonian month Ab was called in Akkadian Nene-gar ("fire making"), sacred to "the queen of the spear" (see Quirinus). This was August, but the Akkadian January was called Abba-uddu (" rising flood "). Ab "father," and Ma "mother," are reversed in many dialects; and Ab becomes the Aryan Pa and Pa-pa, while Ma becomes Am, and Urn, and Ma-ma, "the great nurse." Ab, as the father, is the type of "fertility" and of "fruit" (Hebrew Eb: see Job viii, 1 2; Dan iv, 12, etc); but the root abah signifies "desire."

Empedocles
The following is Forlong's entry on "Empedocles", the Greek standard model philosopher: [2]

Empedokles. A native of Sicily, about 450 B.C. He was a man of wealth and learning, who embraced the atomic theory of Demokritos (see that heading), and affirmed that all nature evolved under fixed laws, without the interference of the gods. With poetic fancy he spoke of atoms combined or separated through love and hate. He thus anticipated our modern theory, and our discoveries as to attractions and repulsions. He said that unfit combinations endured only for a time, to be succeeded by others, and that matter was but the combination of unalterable and substantial atoms, which he called "the roots of things." He distinguished four elements, fire, air, water, and earth, deified, he said, as Zeus, Hera, Nestis, and Aidoneus. These he supposed to be simple elementary substances, eternal and unalterable, which united mechanically according to properties of attraction and repulsion. He conceived them to be constituted by spheres of pure existence, offering equal resistance in every direction, and embodying the ideas of pure divinity, united by Love. Like the Eleatiks he spoke of a "holy and infinite Spirit passing through the world with rapid thoughts ... an eternal power of Necessity " (see Prof. Brandis. Smith's Dicty. Gr. and Rom. Biogr.).

Empedokles insists on good moral conduct, as the best preventive of disease, since all things so follow their natural course. He was extolled as an "averter of evils," and even as a "controller of storms," his disciples saying that he accomplished this miraculously: that he drained marshes, and quelled noxious winds, and epidemics: that he cured strange malignant diseases, and prolonged lives. He was supposed to desire that men should regard him as being an incarnate god. It was an age of varied movements; and Empedokles was acquainted with Anaxagoras, Parmenides, Pausanias, and the Pythagoreans; he was also said to have visited Magi. He believed in transmigrations of souls; and Aristotle places him among the "lonik" physiologists, holding that an existence could as little be supposed to pass into non-existence as that the non-existent could pass into existence, since "from nothing nothing comes." Thus a complete final annihilation (of the universe), is, he said, impossible; and life and death are mere questions of mixture and separation.

Education
Forlong joined the Indian Army in 1843 later filling various posts including that of Secretary and Chief Engineer to the government of Oudh, during which time his exposure to Indian religions, while doing missionary work, led him to abandon his Christian faith, and to investigate some very heterodox ideas about religious origins, including those of the ancient Hebrews. These found expression, firstly, in his two-volume work of comparative religion, Rivers of Life, with its markedly sexual, some would say blasphemous, interpretation of religious rites and symbolism.

The following is a 2008 synopsis of Forlong and his comparative religions encyclopedia: (Ѻ)

“This 1906 classic of comparative literature, hard to find in print today, was the first English-language project to approach the world's religions from an anthropological perspective. The work of thirty years for Scottish author James G.R. Forlong (1824-1904), it was originally published under the now-antiquated title A Cyclopedia of Religions and produced at the author's own expense, so strongly did he feel about the need for it despite the reluctance of the publishing houses of the day to produce it. A road engineer by trade, Forlong traveled the world, learning seven languages and becoming an avid amateur student of native culture-his labor of love was gathering, in this three-volume set, a comprehensive, academic knowledge of the totality of human religious belief.”