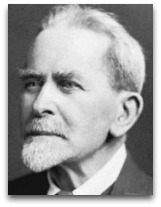 In existographies, James Frazer (1854-1941) (RMS:66) was Scottish social anthropologist, noted for his 1915 The Golden Bough, a 12-volume treatise on comparative religion and mythology.

Overview
In 1890, Frazer published The Golden Bough: a Study in Comparative Religion, in two volumes; in 1906-1915 it comprised twelve volumes, wherein he proposed that mankind progresses from magic through religious belief to scientific thought.

In 1907, Frazer, in his Adonis, Attis, and Osiris, starting with Herodotus, summarized the historical views on the Osiris to Dionysus rescript fairly well. [2]

Doug Renselle (c.2000) reasons, in respect to William Sidis, that: “Amy describes incredible visits by Sidis and Sharfman to Paul Saunders' home. Sharfman told Saunders that Sidis was the greatest brain in our USA. Sidis loved Saunders' library. He would browse Saunders' 20 volume Golden Bough set with ease and almost as if he knew it all, in parallel, instantaneously. He knew what material was on which page in Saunders' whole set! Sharfman brought to mind a recent movie, Good Will Hunting, touched upon briefly in a Harvard link near this page's top.” (Ѻ)

In the film Apocalypse Now (1979), Frazer’s The Golden Bough, was one of the reading books (Ѻ) of Colonel Kurtz, along with the Bible and From Ritual to Romance. (Ѻ)

“Pareto’s Treatise on General Sociology is the hardest boiled book I have ever read. Three times, since I passed my puberty, has my mind been made over. Once by a nexus of which Henry Adams was the center, once by a matrix of which Frazer (Ѻ) (Ѻ) burned brightest, and once by a long study of genetics and evolution. Pareto is doing the job a fourth time, and far more vitally than any others.”