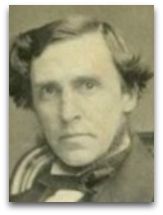 In human chemistry, James Froude (1818-1894) (IQ:180|#150) was English clergyman-abnegator turned historian, novelist, biographer, and editor—noted firstly for his 1849 epistolary philosophical novel The Nemesis of Faith, in which the following is a noted quote: [6]

“What is man the wiser or the happier for knowing how the air-plants feed, or how my centuries the flint-stone was in forming, unless the knowledge of them can be linked on to humanity, and elucidate for us some of our hard moral mysteries?”

wherein he came to question his Christian faith in light of early nineteenth century developments in history, theology, and science, which thus drove him to abandon his religious career—and secondly and most-importantly for being the 1854 “anonymous” English translator German polymath Johann Goethe’s controversial and dangerous 1809 physical chemistry based novella Elective Affinities (see: translations).

Goethe
Irish historian Ciaran Brady, in his James Anthony Froude: An Intellectual Biography of a Victorian Prophet, discusses the Goethe-influence on Froude, speculating on how Froude’s personal experience of sexual abuse at Westminster and later over-indulged taste for ladies brought him to place the exploration of the ethics of love, sexual attraction, and sexual conduct at the center of his aim to ferret out a dialogue on practical ethics. Brady, interestingly, shows how the plot of The Nemesis of Faith is borrowed from Elective Affinities. [8]

Book burning
In 1849, Froude's The Nemesis of Faith was famously burned during at Oxford by English moral philosophy professor, semi-rector, and reverend William Sewell. English science historian and philosopher David Knight (2009) summarizes this as follows: [5]

“Froude’s semi-autobiographical Nemesis of Faith, published in 1848, owed much to Goethe’s novel of human and chemical reactions, Elective Affinities, which he translated. Nemesis lost him his fellowship at Exeter College, Oxford, where his book was publicly burned.”

Carlyle
Scottish satirical writer, essayist, and historian Thomas Carlyle is noted, in this mix, for being Goethean-disciple Ralph Emerson’s (1803-1882) primary guide to German literature; Emerson, in turn, being associated with Froude. [4]

Anonymity
The preface to the collected works set, written by publisher Henry Bohn, states the following: [1]

“The [translation of] Elective Affinities has been executed by a gentleman well known in the literary world, who does not wish his name to appear.”

An additional “Publisher’s Note” (pg. vi) in 1901 identified the translator as James Anthony Froude. [2] Froude’s biographer Herbert Paul (1905) notes that Froude had “translated Wilhelm Meister in 1824, and it was probably at [Carlyle’s] suggestion that Froude translate Elective Affinities for Bohn’s Library in 1850”. [3]

Morality | Sin | Laws | Will
In 1849, Froude, in his The Nemesis of Faith, digressed in a physical sense on the morality and will as follows:

“The source of all superstition is the fear of having offended god, the sense of something within ourselves which we call sin. Sin, in its popular and therefore most substantial sense, means the having done something to gratify ourselves which we knew, or might have known, was displeasing to god. It depends, therefore, for its essence on the doer having had the power of acting otherwise than he did. When there is no such power there is no sin.

Now let us examine this. In reflecting upon our own actions we find that they arise from the determination of our will, as we call the ultimate moral principle of action, upon some object. When we will, we will something, not nothing. Objects attract or repel the will by the appearance of something in themselves either desirable or undesirable. And in every action, if analyzed, the will is found to have been determined by the presence of the greatest degree of desirableness on the side towards which it has been determined.

It is alike self-contradictory and contrary to experience, that a man of two goods should choose the lesser, knowing it at the time to be the lesser. Observe, I say, at the time of action. We are complex, and therefore, in our natural state, inconsistent, beings, and the opinion of this hour need not be the opinion of the next. It may be different before the temptation appear; it may return to be different after the temptation is passed; the nearness or distance of objects may alter their relative magnitude, or appetite or passion may obscure the reflecting power, and give a temporary impulsive force to a particular side of our nature. But, uniformly, given a particular condition of a man's nature, and given a number of possible courses, his action is as necessarily determined into the course best corresponding to that condition, as a bar of steel suspended between two magnets is determined towards the most powerful. It may go reluctantly, for it will still feel the attraction of the weaker magnet, but it will still obey the strongest, and must obey. What we call knowing a man's character, is knowing how he will act in such and such conditions. The better we know him the more surely we can prophesy. If we know him perfectly, we are certain.

So that it appears that at the stage first removed from the action, we cannot find what we called the necessary condition of sin. It is not there; and we must look for it a step higher among the causes which determine the conditions under which the man acts. Here we find the power of motives depends on the character, or the want of character. If no character be formed, they will influence according to the temporary preponderance of this or that part of the nature; if there be formed character, on the conditions, again, which have formed it, on past habits, and therefore on past actions. Go back, therefore, upon these, and we are again in the same way referred higher and still higher, until we arrive at the first condition, the natural powers and faculties with which the man has been sent into the world.

Therefore, while we find such endless differences between the actions of different men under the same temptations, or of the same man at different times, we shall yet be unable to find any link of the chain undetermined by the action of the outward circumstance on the inner law; or any point where we can say a power lay in the individual will of choosing either of two courses—in other words, to discover sin. Actions are governed by motives. The power of motives depends on character, and character on the original faculties and the training which they have received from the men or things among which they have been bred.

Sin, therefore, as commonly understood, is a chimera.

If you ask me why, then, conscience so imperatively declares that it is real? I answer, conscience declares nothing of the kind. We are conscious simply of what we do, and of what is done to us. The judgment may come in to pass sentence; but the judgment is formed on instruction and experience, and may be as wrong in this matter as in any other: being trained in the ordinary theory of morals, it will and must judge according to it; but it does not follow that it must be right, any more than if it be trained in a particular theory of politics, and judges according to that, it must be right. Men obey an appetite under present temptation, to obey which they have before learned will be injurious to them, and which, after the indulgence, they again learn has been injurious to them; but which, at the time, they either expected would, in their case, remit its natural penalty, or else, about which, being blinded by their feelings, they never thought at all. Looking back on their past state of mind, and finding it the same as that to which they have returned when the passions have ceased to work, it seems to them that they knew better, and might have done otherwise. They wish they had. They feel they have hurt themselves, and imagine they have broken a law. It is true they have broken the higher law, but not in the way which they fancy, but by obeying the lower law, which at the time was the stronger.

Our instinct has outrun our theory in this matter; for while we still insist upon free will and sin, we make allowance for individuals who have gone wrong, on the very ground of provocation, of temptation, of bad education, of infirm character. By and by philosophy will follow, and so at last we may hope for a true theory of morals. It is curious to watch, in the history of religious beliefs, the gradual elimination of this monster of moral evil. The first state of mankind is the unreflecting state. The nature is undeveloped, looking neither before nor after; it acts on the impulse of the moment, and is troubled with no weary retrospect, nor with any notions of a remote future which present conduct can affect; and knowing neither good nor evil, better or worse, it does simply what it desires, and is happy in it. It is the state analogous to the early childhood of each of us, and is represented in the common theory of paradise—the state of innocence.

But men had to grow as we grew. Their passions developed rapidly, their minds slowly; but fast enough to allow them, in the interval of passion, to reflect upon themselves, to generalise, and form experience; and, acquiring thus rudimental notions of laws from observing the tendency of actions, men went through what is called the "fall"; and obtained that knowledge of good and evil which Schiller calls "ein Kiesen Schritt der Menscheit" ["a gravel step of humanity"]. Feeling instinctively that the laws under which they were, were not made by themselves, but that a power was round and over them greater than themselves, they formed the notion of a lawgiver [see: Critias hypothesis], whom they conceived they could please by obedience to the best they knew, and make angry by following the worse. It is an old remark, that as men are, such they paint their gods; and as in themselves the passionate, or demonic nature, long preponderated, so the gods they worshiped were demons like themselves, jealous, capricious, exacting, revengeful, the figures, which fill the old mythologies, and appear partly in the Old Testament. They feared them as they feared the powerful of their own race, and sought to propitiate them by similar offerings and services.”

“Goethe is the most remarkable person the world has seen for centuries.”

“I know but one man, of more than miserable intellect, who in these modern times has dared defend eternal punishment on the score of justice, and that is Leibnitz; a man who, if I know him rightly, chose the subject from its difficulty as an opportunity for the display of his genius, and cared so little for the truth that his conclusions did not cost his heart a pang, or wring a single tear from him. And what does Leibnitz say? That sin, forsooth, though itself be only finite, yet, because it is against an Infinite Being, contracts a character of infinity, and so must be infinitely punished. It is odd that the clever Leibnitz should not have seen that a finite punishment, inflicted by the same Infinite Being, would itself of course contract the same character of infinity.”

“High original genius is always ridiculed on its first appearance; most of all by those who have won themselves the highest reputation in working on the established lines. Genius only commands recognition when it has created the taste which is to appreciate it.”

“To deny the freedom of the will is to make morality impossibility.”