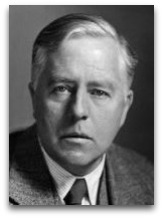 In existographies, James Jeans (1877-1946) (CR:18) was an English mathematical physicist who worked in astronomy, thermodynamics, heat, and radiation, noted, in hmolscience, for a number of physics-based philosophical conjectures, implications, and summaries.

In 1933, Jeans, in his The New Background of Science, an expansion of his 1931 book The Mysterious Universe, argues that inanimate matter obeys the second law of thermodynamics implicitly, but life succeeds in evading the second law in varying degrees. Jeans even argues that this is what defines life: [1]

“In fact it would seem reasonable to define life as being characterized by a capacity for evading this law. If probably cannot evade the laws of atomic physics, which are believed to apply as much to the atoms of a brain as to the atoms of a brick, but it seems able to evade this statistical laws of probability. The higher the type of life, the greater is its capacity for evasion.”


Jeans, in his work, made occasional reference to god stating, for example, that: “from the intrinsic evidence of his creation, the Great Architect of the Universe now begins to appear as a pure mathematician.” This may explain his objection to governance of the second law and life. Jeans argues further that the higher the type or form of life, the greater its capacity for evasion, and that these observed evasions resemble the results that would be produced by an army of sorting demons, so much so that “it would seem permissible to conjecture that life operates in some similar way.” Romanian mathematician Nicholas Georgescu-Roegen cites this violation of the second law view in his 1971 The Entropy Law and the Economic Process, by stating that “the thought that life may be characterized by a capacity for evading this law [as professed by Jeans], once generally denounced as sheer obscurantism, is now endorsed by almost every authority in physico-chemistry.” [2]

Free will
In 1942, Jeans, in his Philosophy and Physics, cites Benedict Spinoza as saying: [3]

“A stone in the air would think itself free if it could forget the hand that had thrown it.”

Jeans, after discussing Rene Descartes, summarizes that “free will is only our name for unconscious determinism.” Jeans also states:

“Modern philosophy has come to the conclusion that there is no real alternative to determinism, with the result that the question now discussed is no longer whether we are free but why we think we are free.”