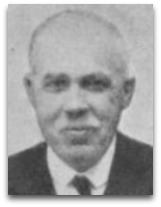 In existographies, James Johnstone (1870-1932) (CR:45) was an English oceanographer and experimental biologist noted, in evolution thermodynamics, for his 1914 to 1921 publications wherein he treated an organism as physio-chemcial mechanism, and therein digressed into philosophical discourse.

Overview
In 1914, Johnstone, in his The Philosophy of Biology, discussed the nature of the mechanism of life in relation to thermodynamics. On thermodynamics and subjects such as table-rapping, spooks, the planchette, etc., Johnstone concludes that:

“The law of conservation applies to some things and not to others, and the things which it does not apply are unreal.”

In 1921, Johnstone, in his The Mechanism of Life in Relation to Modern Physical Theory, built on the thermodynamics of Scottish physicist William Thomson and the evolutionary logic of French philosopher Henri Bergson, to postulate that if the universe has existed for eternity than the existence of life must confirm that sometime in the past the second law of thermodynamics must have reversed itself; the following is an example view:

“In living processes, the increase of entropy is retarded.”

In this work, Johnstone was speculative about the physical chemistry implications of free will vs. determinism, concluding that the question is meaningless, because the mind cannot be measured. [1]

In 1932, Johnstone, in Philosophy, penned “Entropy and Evolution”; the abstract of which is as follows: [6]

“The conception of entropy came from the theoretical study of the steam-engine, and, neglecting refinements of mathematical treatment, can easily be illustrated. The motive power of the engine comes from the transformation of the heat generated by the combustion of the fuel. The mechanism transforms the kinetic energy of the molecules of heated steam into the kinetic energy of the parts of the engine. Consider a steamship under way: for a brief period of time this can be regarded as an automatic physical system. Some of the heat conveyed by the steam transforms directly into mechanical energy and some passes out into the ocean in the condenser water. We take the latter fraction: in the boiler there is a certain quantity, Q1, at a temperature of, say, 200°C, that is, 473° absolute, and its entropy is simply Q1/473° ab. The same quantity passes out into the ocean where its temperature falls to, say, 10°C, or 283° ab., and its entropy is now Q1/283° ab. Plainly the former quantity of entropy is less than the latter, so that in the transformation of heat into mechanical energy entropy has increased. The conception has been generalized so as to include all forms of energy and all physical transformations, and it can be shown that in all physical events that occur of themselves entropy increases. The conception includes these notions: (1) Available and unavailable energy; (2) greater or lesser improbability of the elements of the systems contemplated; and (3) the physical meanings of before and after.”

In extrapolating this model to animals, Johnstone arrives at the correct view that the heat from the sun is the hot body, but incorrectly concludes that the mass of chemical compounds, namely taken up from the soil in plants roots and animal digestion (water, carbonic acid, and nitrate) is the working substance, and that radiated heat, to the atmosphere is the condenser, so to speak.

Life and reversals of the second law
In relation to evolution and life, Johnstone states “we are convinced that an evolutionary process that has occurred”, and that “we cannot think of a time in the past when the universe did not exist”. On this basis, to account for the existence of “human and animal minds” (which he associates with a retardation in the increase of entropy), Johnstone reasons: [1]

“We are compelled to postulate that somewhere or other, or some time or other, the second law of thermodynamics must reverse itself … otherwise we shall be compelled (as Sir William Thomson was) to postulate a beginning, or creation.”

Curiously, this 1921 theory is very similar to American mathematical prodigy William Sidis’ thermodynamics of life theory, found in his 1920 treatise The Animate and the Inanimate (published in 1925), where he, similarly on the logic of Thomson, that

“Reversals of the second law are a regular phenomenon, and [they are identified] with what is generally known as life.” [3]

In 1914, on the relation between entropy, mechanism, and life, Johnstone stated: [2]

“Entropy is a shadowy kind of concept, difficult to grasp … but again, we may point out that, the reader who would extend the notion of mechanism into life simply must grasp it.”

"The concept which is special to the organism is one which involves the reversal of the second law of thermodynamics."

It would seem logical, therefore, to conclude that this Sidis-Johnstone reversal of the second law theory of life, must have an earlier theorist?

Influences
Johnstone’s publications were influential to American physical chemist and mathematician Alfred Lotka and his 1922 articles “Contribution to the Energetics of Evolution”, “Natural Selection as a Physical Principle”, and his 1924 book Elements of Physical Biology. In commentary on Johnstone’s entropy retardation logic, in particular that “in living processes, the increase in entropy is retarded,” Lotka states tells us “he points out that this is true, primarily, of plants; but that among animals also natural selection must work toward the weeding out of unnecessary and wasteful activities, and thus toward the conservation of free energy, or, what amounts to the same thing, toward retarding energy dissipation.” [4]

Education
Early in his career Johnstone a professor of oceanography at the University of Liverpool. He later became head of department in 1919 remaining in the position into his death. Johnstone was involved in the formation of the Journal of Experimental Biology, formed between 1923 and 1929. [5]

“An organism is a physico-chemical mechanism.”

“Entelechy does not cause chemical reactions to occur.”