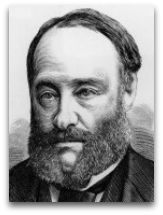 In existographies, James Joule (1818-1889) (IQ:180|#167) (Murray 4000:16|P) [Kanowitz 50:17] [Cropper 30:3|T] (GPE:28) [CR:120] was an English engineer and physicist noted for his experiments in the determination of the mechanical equivalent of heat, one of the precursors to the logic behind both the first and second law of thermodynamics. Joule was the son of a wealthy brewer who was tolerant enough of the scientific interests of his son to furnish him with a home laboratory, in which his elaborate experiments on the inter-conversion of forms of energy, from heat, gravitational, to mechanical, to electric, etc., were conducted. [1]

Into the late 1830s, while working by day as a brewer, Joule, at night, was said to have been searching for the appropriate principles of the construction of an electromagnetic engine that would rival the steam engine with respect to commercial efficiency. By 1841, however, he realized that the inherent limitations of the electric motor would not allow it to outperform the steam engine; this setback, it is said, is what prompted him to consider the interrelationships between heat and electricity. [7]

In the early 1840s, Joule repeated British chemist and physicist Humphry Davy’s famous 1799 ice-rubbing experiments, which showed that ice cubes rubbed together in a room colder than the freezing point of water can be made to melt, a result which conflicted with the caloric theory, and began to extrapolate this principle to various other work-producing experiments, such as chemical, mechanical, and electrical.

In his 1843 paper “On the Caloric Effects of Magneto-Electricity, and on the Mechanical Value of Heat”, Joule refuted the caloric theory, by showing that current generated heat and that heat was not a substance, but a “state of vibration” that could be “induced by an action of a simple mechanical character.” [4]

In 1843, Joule summarized his overall objective and theory by stating that:

“I shall lose no time in repeating and extending these experiments, being satisfied that the grand agents of nature are … indestructible; and that wherever mechanical force is expended, an exact equivalent of heat is always obtained.”

In total, Joule would eventually go on to complete 65 separate experimental trials, in a great variety of ways, contraptions, and arraignments, whereby heat can be made from work or work from heat.

The best known calculation for the mechanical equivalent of heat was Joule's famous "water paddle experiment", that performed in Jun 1845, wherein the falling weight was attached to wound rope to a wooden paddle-wheel immersed in a tub of water. When the weight fell, the paddle wheel turned, causing agitation in the water and as a result a temperature increase. [2] The depiction shown adjacent is an engraving of Joule's apparatus for measuring the mechanical equivalent of heat. [3]

In Joule's famous 1845 paper, entitled "On the Mechanical Equivalent of Heat", he published the value A for the amount of work W required to produce a unit of heat Q. Joule contended that motion and heat were mutually interchangeable and that in every case, a given amount of work would generate the same amount of heat, regardless of the process. [2]

In 1844, Joule, in his “On the Changes of Temperature produced by the Rarefaction and Condensation of Air”, stated the following summary, in respect to his two previous mechanical equivalent of heat experiments:

“The mechanical equivalents of heat derived from the foregoing experiments were so near 838 lbs, the result of magnetical experiments in which ‘latent heat’ could not be suspected to interfere in any way, as to convince me that the heat evolved was simply the manifestation, in another form, of the mechanical power expended in the act of condensation.”

after which, he then reported on two experiments, wherein he used two strong connecting copper vessels, and calorimeter, with double walls, designed to accommodate the two vessels, as shown below, wherein after evacuating one container, with an air pump (vacuum pump), leaving the other filled with gas, then opened the valve, and calculated the change in temperature in the water of the calorimeter: [10]

He then repeated this experiment, but this time by putting each copper vessel in its own calorimeter, so to ascertain a unique temperature change for each: 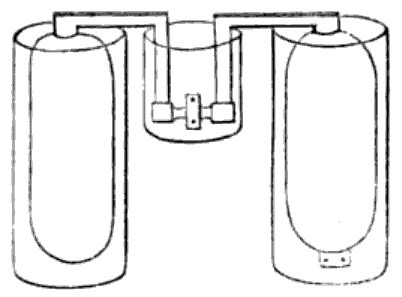 These two experiments enabled him to prove that when a “perfect gas” expands without doing work its “internal energy” remains unchanged.

BAAS meeting
Joule was brought into the famous “thermodynamics” circle when in 1847 he gave a short presentation on an improved version of his paddle wheel experiments to the British Association for the Advancement of Science.

The meeting was attended by Irish-born Scottish physicist William Thomson, along with his friend Gabriel Stokes, during which they watched Joule exhibit his paddle wheel, wherein he demonstrated how fluid friction generated heat.

After the meeting, the two approached Joule and began a discussion with him. William and his brother James Thomson would later comment that the Joule's data would "unsettle" anyone steeped in the Carnot-Clapeyron version of heat, particularly the datum that heat could be generated by friction of fluids in motion. [9] Thomson, prior to his encounter with Joule, is said to have imbibed from Carnot the caloric theory logic that: [8]

“Heat is a substance, invariable in quantity, not convertible into any other element, and incapable of being generated by any physical agency.”

The followup publications of Thomson (1848, 1849), in turn, resulted to communicate Joules' work to German physicist Rudolf Clausius, who would use this his experimental data to found the science of thermodynamics (1850-1865). [7]

Joule’s draw to experimentation, much of it done at the family brewery, was such that Joule rarely left home without scientific apparatus. Indeed, while visiting a waterfall with his wife on their honeymoon in 1847, he produced a thermometer with which to measure the change in the temperature of the water as it fell. [5]

The underlying motives behind the anecdote becomes apparently clear from a Joule’s 1847 lecture “On Matter, Living Force, and Heat”, read at the reading room of St. Ann’s Church, in which he explains that the measure of the mechanical equivalent of heat created by the friction of the wind and agitation of the water gives experimental proof for the story of genesis as described in the Bible, to the effect that God’s powers have been conserved, so to speak, or something to this effect over the "last 4000 to 6000 years" since the creation of the universe.

In other words, the need to take the measurements on his honeymoon were out of a need to find an experimental proof for the story of genesis and hence the existence of God. [6]

Quotes | By
The following are quotes by Joule:

“The mechanical equivalents of heat determined by the various series of experiments given in this paper are 823, 795, 820, 814, and 760. The mean of the last three, which I take as least liable to error, is 798 lb., a result so near 838 lbs, the equivalent which I deduced from my magnetical experiments, as to confirm, in a remarkable manner, the above explanation of the phenomena described in this paper, and to afford a new and, to my mind, powerful argument in favor of the ‘dynamical theory of heat’ which originated with Bacon, Newton, and Boyle, and has been at a later period so well supported by the experiments of Rumford, Davy, and Forbes.”

“The principles I have adopted lead to a theory of the steam-engine very different from the one generally received, but at the same time much more accordant with facts. It is the opinion of many philosophers that the mechanical power of the steam-engine arises simply from the passage of heat from a hot to a cold body, no heat being necessarily lost during the transfer. This view has been adopted by Clapeyron in a very able theoretical paper, of which there is a translation in the Third part of Taylor's Scientific Memoirs. This philosopher agrees with Carnot in referring the power to vis viva developed by the caloric contained by the vapor in its passage from the temperature of the boiler to that of the condenser. I conceive that this theory, however ingenious, is opposed to the recognized principles of philosophy, because it leads to the conclusion that vis viva may be destroyed by an improper disposition of the apparatus.”

— James Joule (1844), “On the Changes of Temperature produced by the Rarefaction and Condensation of Air” (pg. 188)

“The height of the pulleys from the ground was twelve yards, and consequently, when the weights had descended through that distance, they had to be wound up again in order to renew the motion of the paddle. After this operation had been repeated sixteen times, the increase of the temperature of the water was ascertained by means of a very sensible and accurate thermometer.”

— James Joule (1845), “On the Existence of an Equivalent Relation between Heat and the Ordinary Forms of Mechanical Power” (Ѻ)(Ѻ)

“It was from Dalton’s instruction, that I first formed a desire to increase my knowledge of original research.”