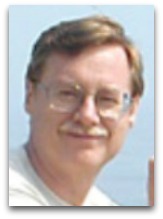 In hmolscience, James J. Kay (1954-2004) was an Canadian environmental systems professor noted, in evolution thermodynamics, for his 1984 to 2002 work on applying a thermodynamics based gradient theory to questions of life and evolution.

In 1994, Kay, in his “Life as a Manifestation of the Second Law of Thermodynamics”, co-written with American ecologist Eric Schneider, argued on the basis of a Hatsopoulos-Keenan-Kestin reformulated second law that evolutionary structures are a result of gradients maintaining systems at some distance away from equilibrium. [1] Their joint research on the role of the second law in the understanding of complexity and ecosystem dynamics was the subject of the cover story for the October 5, 2002 issue of New Scientist.

In 1999, Kay, in his “Ecosystems as Self-Organization Holarchic Open Systems: Narratives and the Second Law of Thermodynamics”, stated the following: [4]

“At the turn of the century, thermodynamics, as portrayed by Boltzmann, viewed nature as decaying toward a certain death of random disorder in accordance with the second law of thermodynamics. This equilibrium seeking, pessimistic view of the evolution of natural systems is in contrast with the phenomenology of natural systems, whose time dependent behavior is a progression away from disorder and equilibrium, into highly organized structures that exist some distance away from equilibrium.”

Kay goes on to state that Austrian physicist Ludiwg Boltzmann recognized the apparent contradiction between the heat death of the universe and the existence of life in 1886.

Kay was a strong proponent of the integration of the second law into ecology, as evidenced by famous 1928 Eddington pet theory quote found prominently on the top of his personal webpage. [2]