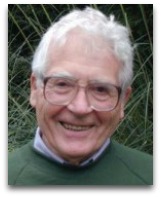 In existographies, James Lovelock (1919-) (CR:25) is a English scientist noted, in chnops-thermodynamics, for his 1964 argument that to build a thermodynamics-based life-detection apparatus, to be used in space missions on other planets, Mars in particular, able to “look for a reduction or reversal of entropy as a sign of life”. This tentative theory, as outlined in his 1975 article “Thermodynamics and the Recognition of Alien Biospheres”, evolved into the now famous Gaia hypothesis. [1]

Entropy and extraterrestrial life
In circa 1964, while Lovelock was working at the Jet Propulsion Laboratories (JPL), at the California Institute of Technology, he conceived of a verbal life-detection entropy reversal theory during discussions and debates on how one would construct life-recognition equipment for use in a planned voyager mission to Mars. Two probes, to note, built by JPL and funded by NASA, were eventually launched in 1977. [3] In the planning stages of probe construction, discussions erupted on the issues of life recognition and what is life, in general; Lovelock was skeptical and posed the following question:

“How can we be sure that the Martian way of life, if any, will reveal itself to tests based on Earth’s lifestyle?”

After a bit of debate on the issue, one of Lovelock’s JPL colleagues responded with: “well, what would you do instead?” At the time, Lovelock gave the vague reply:

“I’d look for an entropy reduction, since this must be a general characteristic of all forms of life.”

In 1979 retrospect on this response, along the lines of other famous entropy quotes, Lovelock comments: [1]

“Understandably, this reply was taken to be at the best unpractical and at worst plain obfuscation, for few physical concepts can have caused as much confusion and misunderstanding as has that of entropy.”

In 1979, after thinking about the relation between entropy, fitness, beauty, and survival, Lovelock stated: [2]

“I wonder if a positive answer would enable us to rate beauty objectively, rather than through the eye of the beholder. We have seen that the capacity greatly to reduce entropy or, to put it in the terms of information theory, greatly to reduce the uncertainty of the answers to the questions about life, is itself a measure of life. Let us set beauty as equal to such a measure of life. Then it could follow that beauty also is associated with lowered entropy, reduced uncertainty, and less vagueness.”

Gaia hypothesis
The tentative theory was rejected by Lovelock’s colleagues, but the idea of life being associated with a reduction or reversal of entropy stayed on his mind later evolving, with the help of American biologist Lynn Margulis, into the now-famous Gaia hypothesis, a postulate that the earth is a large living organism. [1] The hypothesis argues that the earth is large living super-organism, where “the biosphere, atmosphere, oceans, and soil constitute a feedback or cybernetic system which seeks an optimal physical and chemical environment for life on this planet”. [4]

Education
Lovelock completed a BS in chemistry in 1941 from Manchester University, a PhD in medicine in 1948 from the London School of Hygiene and Tropical Medicine, and a DSc in biophysics from London University in 1959. [2] Lovelock worked briefly with British biochemist Archer Martin, who did pioneering work on gas chromatography, which may be from where Lovelock learned his thermodynamic ideas.