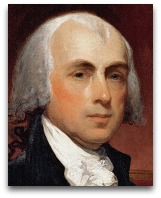 Education
Madison, according to James Haught (1996), was a brilliant student, born into a wealthy family. [5]

In 1769, Madison, age 18, specifically chose to ride horseback to New Jersey to attend the College of New Jersey, or what is now Princeton University, which he selected, according to historian Irving Brant (1974), specifically for its “hostility to episcopacy”, i.e. a school against the model of educational government by bishops. [9] Madison completed his four year course in just two years.

In 1769, Madison, according to John Q. Stewart, was studying a primitive form of Newtonian-based social mechanics (or social physics) at Princeton, under the direction of Scottish-born American John Witherspoon, the logic of which he is said to have used in the construction and debate room floor selling of the penning of the US Constitution (1787); the following are example quotes:

“There can be no question of the fact that, in early Princeton, physics cooperated with politics in a sort of analogical double play, Newton to Witherspoon to Madison.”

“The eighteenth century was dominated intellectually by the scientific work of Newton, and mechanical metaphors sprang naturally to men’s minds. Men had found a rational order in the universe and they hoped that it could be transferred to politics. Madison spoke in the most precise Newtonian language when he said that such a ‘natural’ government must be so constructed ‘that its several constituent parts may, by their mutual relations, be the means of keeping each other in their proper places.’”

— Levine and Cornwell (1968), An Introduction to American Government [4]

“The founders were elitists, and realists about human nature. Their task was to make passion subject to reason. If men could be expected to be selfish, or worse, then said James Madison ‘ambition must be made to counteract ambition’. The Newtonian principles of action and reaction were applied to politics.”

Overview
In 1781 to 1783, Madison, a Virginia-born American, was a delegate to the Congress of the Confederation from Virginia, and was succeeded by Thomas Jefferson, who became delegate for one year, until May 1784.

In Nov 1784, the Virginia legislature was in an uproar over a proposal come before it to support, via a new general tax, “teachers of the Christian religion”. In support of this proposal was Patrick Henry (1736-1799) (Ѻ), the person behind the famous “Give me liberty, or give me death!” speech, in opposition to the Stamp Act 1765. Henry maintained that this new tax was needed because of the “moral decay” that had set in since Virginia disestablished the Anglican church in 1777 by adopting its own Bill of Rights.

First Amendment
In Jun 1785, Madison penned his “Memorial and Remonstrance Against Religious Assessments”, in opposition to the proposal, which, according to Charles Pierce (2009), is the “most closely reasoned argument for the separation of church and state ever written”. [6] Madison, in his writing, warned that even the minimal infringement of religious liberty, such as was being proposed by the Virginia state legislature, namely a small tax to support "teachers of the Christian religion", was an opening wedge that could lead to tyranny. His thoughts on the issue, according to Sunand Joshi (2014), led to the passage of the First Amendment. [8]

Religion | Beliefs
Madison, a Haught disbeliever (#18), is described, by James Haught (1996), as a "non-Christian" who fought against the employment of chaplains to pray at sessions of Congress. [5]

Quotes | By
The following are quotes by Madison:

“Religious bondage shackles and debilitates the mind and unfits it for every noble enterprise.”

“Every new and successful example, therefore, of a perfect separation between the ecclesiastical and civil matters, is of importance; and I have no doubt that every new example will succeed, as every past one has done, in showing that religion and government will both exist in greater purity the less they are mixed together.”