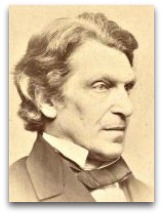 In hmolscience, James Martineau (1805-1900) was an English theologian and philosopher noted, in cessation thermodynamics, for his 1888 speculations on the physics of death, in respect to energy transformations.

Overview
In 1888, Martineau, in his A Study of Religion, devoted a section to the implications of the conservation of energy and brain death; the following is an example excerpt: [1]

“Let us follow the law of conservation of energy into the phenomena of death. In its physical aspect, death presents simply a case of transformation of energy.”

Beyond this base statement, however, Martineau reaches rather ambiguous conclusions; speculating that mental thoughts, affections, and volitions may or may not be in the category of ‘energy’. He also devotes a second chapter to the ‘metaphysics’ of death, with digression on aspects of the soul. Martineau’s discussions seem to be based largely on Irish physicist John Tyndall’s 1876 article on the physics of the brain. [2]