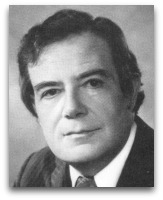 In 1978, Miller, in his Living Systems, a thousand-page expansion of the former, attempted to outline a biology-based sociology, discussing his views on “open” and “closed” systems (albeit defined incorrectly), and how entropy relates to such systems. [1] Miller uses the abstract conception of “matter-energy” as well as information as that which may cross the boundary of the system. The following quote summarizes his view of systems: [2]

“Most concrete systems have boundaries which are at least partially permeable, permitting sizable magnitudes of at least certain sorts of matter-energy or information transmissions to cross them … such a system is an open system. A closed system, in contrast, is one with impermeable boundaries through which no matter-energy or information transmissions of any sort can occur. In open systems entropy may increase, remain in steady state, or decrease.”

Education
Miller completed his AB (1937), AM (1938), and PhD with a thesis on thesis: on unconsciousness and subliminal perception (1943) all in psychology at Harvard University. Miller also obtained his MD from Harvard Medical School in 1942 focusing on psychiatry and general medicine. [3]

Living systems
The following quote summarizes Miller’s view of living systems, whether it be an organism, a group, an organization, a society, or a supranational system: [2]

“Living systems maintain a steady state of negative entropy even though entropic changes occur in them as they do everywhere else. This they do by taking in inputs of foods or fuels, matter-energy higher in complexity or organization or negentropy, i.e. lower in entropy, than their outputs.”

Miller also speculates on the relationship between energy and entropy; reasoning, for instance, that it may be possible to determine the minimal amount of energy necessary to transmit one bit of information. [1]

Biology and social science
Miller’s original seed or goad of interest in living systems theory came from English-born American mathematical philosopher Alfred Whitehead, who in the mid 1930s was a mentor to Miller at Harvard. Whitehead suggested that Miller make a serious attempt to develop a theoretical integration of the biological and social sciences dealing with mankind and other living beings comparable to the physical universe theories of English physicists Arthur Eddington and James Jeans. [3] It is likely from Eddington’s 1928 book The Nature of the Physical World that Miller learned his definition of entropy.