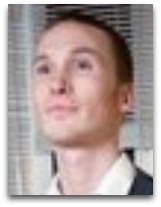 In hmolscience, James Sandham (c.1984-) is a Canadian writer noted, in literature thermodynamics, for 2008 The Entropy of Aaron Rosclatt, which touches on the philosophical turns involved in the youth-coming-into-manhood, i.e. of idealism into reality transition, themed on the inevitability of the second law.

Overview
In 2008, Sandham, in his The Entropy of Aaron Rosclatt, addresses “the confrontation of youth's crisp idealism with reality-the reality that life is not so easily understood or tamed, and that, despite our best efforts, we are all inevitably subject to the slow slide into entropy”. [2]

Education
Sandham completed his BA in political science in 2006 from the University of Guelph. [2]