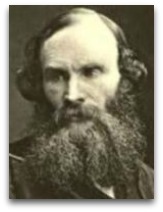 In thermodynamics, James Thomson (1822-1892) (IQ:175|#210) was a Scottish engineer, grandson to James Thomson (farmer), son of James Thomson (mathematician), and older brother to William Thomson (physicist), who in about 1843 began to establish a dialog with his younger brother on application of the heat engine theories of French engineer Sadi Carnot in his 1824 Reflections on the Motive Power of Fire, as presented in the 1834 paper "Memoir on the Motive Power of Heat” by French physicist Émile Clapeyron, to the application in the area of steamship improvement, particularly power going to waste.

Carnot queries
In Aug 1844, James, in a letter to his brother William Thomson, inquired who [Sadi Carnot] it was that had proved there was a definite quantity of mechanical effect (work) given out during the passage of heat from one body to another. He stated his intentions of writing an article for the Artisan about the theoretical possibility of working steam engines without fuel by using over again the heat which was thrown out in the hot water from the condenser, noting that:

“I shall have to enter on the subject of the paper you mentioned to me.”


This "paper", according to historian British energy historian Crosbie Smith, was almost certainly the 1837 translation for Taylor’s Scientific Memoirs of Clapeyron’s “Memoirs on the Motive Power of Heat”. [3] The discussions in James letter of 1844, according to Smith, are the earliest record of implicit references to Clapeyron and Carnot by the Thomsons.

The core strand of influence in the early development of thermodynamics, traces from Carnot to Clapeyron to the Thomson brother's discussions on Clapeyron's paper, to German physicist Rudolf Clausius, who found out about Carnot's theory through William's 1848-49 papers on the subject. [2] James may have picked up on the work of Clapeyron through association with his Glasgow College professor Lewis Gordon, beginning in 1841, although it seems that William was the first to acquire a copy of Clapeyron's book. [3] In their early years, both James and William had studied the writings of Scottish physicist David Forbes, a later influence to Scottish engineer William Rankine, another founder of thermodynamics.

Prediction | Freezing point lowering by pressure
On 2 Jan 1849, Thomson, in his publication “Theoretical Considerations on the Effect of Pressure in Lowering the Freezing Point of Water”, made the following prediction, arrived at after grappling with an apparent "absurdity" of the possibility of perpetual motion pointed out by his brother: [4]

“Some time ago my brother, professor William Thomson, pointed out to me a curious conclusion to which he had been led, by reasoning on principles similar to those developed by Carnot, with reference to the motive power of heat. It was, that water at the freezing point may be converted into ice by a process solely mechanical, and yet without the final expenditure of any mechanical work. This at first appeared to me to involve an impossibility, because water expands while freezing; and, therefore, it seemed to follow, that if a quantity of it were merely enclosed in a vessel with a moveable piston, and frozen, the motion of the piston, consequent on the expansion, being resisted by pressure, mechanical work would be given out without any corresponding expenditure; or, in other words, a perpetual source of mechanical work, commonly called a perpetual motion, would be possible. After farther consideration, however, the former conclusion appeared to be incontrovertible; but then, to avoid the absurdity of supposing that mechanical work could be got out of nothing, it occurred to me that it is necessary farther to conclude, that the freezing point becomes lower as the pressure to which the water is subjected is increased.”

“James Thomson, one of the early pioneers of physical chemistry, was able, by an implicit denial of Carnot’s assumption [material theory of heat], to predict and prove that the freezing point of water would be lowered by pressure.”

In 1855, James was appointed professor of civil engineering at Queen's University Belfast. He remained there until 1873, when he accepted the professorship of Civil Engineering and Mechanics at the University of Glasgow, a post in which he was successor to the influential William Rankine. He retired in 1889.

In 1871, James Thomson constructed a plaster pressure-volume-temperature surface, the original shown adjacent as a P,V,θ surface, on display (Ѻ) at the Hunterian Museum and Art Gallery, University of Glasgow based on data for carbon dioxide collected by Thomas Andrews. [6] The surface is described as follows: [7]

“This is a plaster model of the theoretical thermodynamic surface for carbonic acid, also called the PV theta curve. Carbonic acid H2CO3 results from dissolving carbon dioxide gas in water. It only exists in solution.”

The model, according to the gallery, is dated “circa 1860 Queen's University, Belfast, Northern Ireland”. [7]