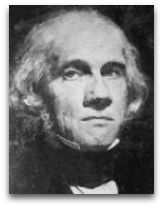 In thermodynamics, James Thomson (1786-1849) was an Scottish mathematician, son of James Thomson (farmer), noted for being the base-board of the Glasgow school of thermodynamics, where he was a professor of mathematics (1832-49), and for the idea that his two sons James Thomson (engineer) and William Thomson (physicist) should have a well-rounded education, taking them to France and Germany among other places; the synergy and discussions between the latter two on theoretical nature of heat engines (1843-1848) resulted in launching the science of thermodynamics. [1]

Education
James Thomson was the son of James Thomson (farmer), a wealthy farmer who is said to have home-schooled his son on the basics of education. The young James Thomson was said to have remarkable abilities and strong character. He was brought up on the land as a farm laborer, and received from his father the rudiments of education. Of note, he taught himself, without either skilled teachers or good textbooks, the art of making sundials and a night-dials, able to tell the time of day by one of the positions of Ursa Major. [2]

Sometime at about the age of twelve, James Thomson began as a pupil at a small school run by a Dr. Samuel Edgar, a Presbyterian minister, at Ballykine, to learn the classics and mathematics; his abilities where such that he soon was promoted to assistant teacher. From 1810 to 1814, while still teaching at Ballynahinch, he spent six winter months studying at the University of Glasgow, completed his MA in 1812. In the years to follow, he continued to attend classes in Medicine and Divinity still with the intention of entering the Church.

James and William
In Belfast he met Margaret Gardner, the daughter of a Glasgow merchant, and they were married in 1817. The newly married couple lived in a house opposite the Belfast Academical Institution and their seven children were born in that house. The first son of the marriage was James Thomson (engineer), born in 1822, the second son, born in 1824, is the famous William Thomson (physicist).

James Thomson was offered the Chair of Mathematics at Glasgow University and took up the appointment in 1832, the essential starting point for the Glasgow school of thermodynamics.

Margaret Thomson, to note, had died in 1830 leaving Thomson to bring up his seven children. Two years after taking up the professorship his two sons James (then twelve years old) and William (then ten years old) began their university studies at Glasgow. These two young men turned out to be Thomson's most talented mathematics students.

In 1841, at the age of seventeen, in coordination with his father, William Thomson wrote his first scientific paper on Joseph Fourier’s analysis of heat under the pseudonym P.Q.R. (an insistence of his father that William be disguised, supposedly owing to his young age; the acronym, according to physics historian David Lindley, having no particular meaning, except that they are often used as a triplet of variables in three dimensional mathematical problems), which was submitted to the Cambridge Mathematical Journal by his father, titled “On Fourier's expansions of functions in trigonometric series”; and soon two more papers of similar theme soon followed. This was William's first foray into studies on the nature of heat.

Publications
As a mathematician he is famed as a writer of textbooks. While in Belfast he published A Treatise on Arithmetic in Theory and Practice (1819), Trigonometry, Plane and Spherical (1820), Introduction to Modern Geography (1827), and The Differential and Integral Calculus (1831). He later edited a version of Euclid's Elements (1834) and wrote his most famous text An Elementary Treatise on Algebra Theoretical and Practical (1844). [3]